Papa John's was one of the better inexpensive pizza joints in Davis. They're a part of a national chain that lags only behind Little Caesars and Pizza Hut in size. Not to be confused with Papa Murphy's. Coupons-a-plenty arrive in the mail, making ordering here an even cheaper proposition. You can order online from their website (though you can now use some selected print coupons if you do, as well as new offers on the website.) — please note online ordering stops at 10:30pm now, so any order placed after that should not show up at the restaurant.

They had dipping sauces (garlic butter, pizza sauce) which are included with the pizzas as well as Bread Sticks, they also have (cheese sauce, buffalo sauce, blue cheese sauce, honey mustard sauce, and barbecue sauce), and they include a Pepperoncini with a pizza.

They also have wings and chicken strips which can come unflavored or with barbecue, buffalo, and honey chipotle sauces as well as 2 dipping sauce cups.

They have added small personal salads to their menu for $3.99, with the option of Italian or Ranch dressing.

They are now featuring a new improved Cinnapie which is the size of a small pizza 10" for $3.99.

They NOW charge $1.25 for delivery. They just lowered the delivery charge just for Davis!

On Sunday, March 4th, 2007, they offered in a coupon given to past customers a large 1 topping pizza for $5.99, pickup only for "Customer Appreciation Day", and as many pizzas as wanted could be had at that price.

Actually it's not a carryout only, you place the order online but it is for delivery!! So you are IN luck! — PapaJ

The point is, not everyone has access to the internet at all hours, believe it or not. If it's 9 PM, you're hungry, and can't get online, you're not going to be able to use the coupon. —WilliamLewis

They have a current Carryout promotion for an Extra Large 1-Topping pizza for $8.88. 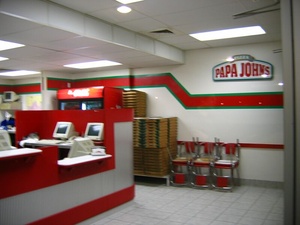 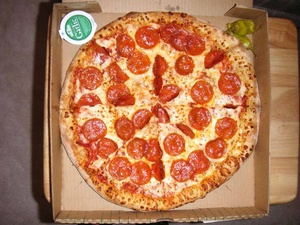 2005-07-02 21:13:33   In Neal Stephenson's epic cyberpunk novel Snow Crash, the United States — now in shambles — can only do two things better than any other nation: Deliever pizza and write microcode. Those who work in the pizza industry attend a specific University for four years, and if a pizza isn't delievered in 30 minutes or less, news is flashed to the Pizza Headquarters. Immediately, the owner of the corporation calls the customer within five minutes, apologizes profusely, flies to the customer's home in a jet helicopter, apologizes more, and gives him a free trip to Italy.

If Papa John's is any indication, we are unreasonably far from this fast-paced cyberpunk reality. My pizza, which I ordered online at 11PM, was never delivered. It turns out that you can order pizza through their website up until 11:30PM, but their store closes at 11PM. Thus, all intermediate orders get lost. I called them the next day, starving, and told them I never got my pizza and that my credit card had been charged. They didn't apologize and asked me what kind of pizza I had ordered. "Cheese," I remarked. In about 30 minutes they came with my pizza — 13 hours late — along with a copy of the bill.

Also, their garlic sauce is way too buttery. —PhilipNeustrom

2005-07-03 13:25:25   Yeah, I find online orders are a terrible way to go, too. NOBODY does online orders well yet. In fact, if I have to make an online order to get a special discount, I'll usually follow up with a phone call to make sure they got it. —JaimeRaba

If Papa Johns offers the service they should honor it. If online orders are stupid and the website allows you to order pizza past the closing time of the store, then maybe they should stop offering it! I only did the online order because I wasn't sure you could pay with credit card when you get it delievered. Can you?

of course you can, if they dont have a portable swiper they'll take your info over the phone and punch it in by hand.

2005-09-18 00:25:31   Since we now live 5 minutes' walking distance from here, I decided to try Papa John's. The pizza was OK, but BlancheNonken and I felt the sauce was too sweet. I consider that a diet issue if they're sweetening it in some way (adding refined sugar or some such). —JeffreyNonken

2005-11-12 00:56:12   Best pizza joint in town! If ever there was a question about a pizza to get, Papa John's here we come. Doughy wonderful crust, good amount of sauce, perfect balance of cheese and other toppings. Much higher quality pizza than that Roundtable and Dominos stuff they try to pass off as pizza. —TarynHornen

2006-02-14 15:10:18   The website ordering isn't well thought out by the corporation, and is a giant pain in the ass for those who work there. Calling to make sure the order was recieved after you place it is a really good idea. —DaveCar

2007-01-16 23:38:55   I just had a pizza from here and it tasted like something I'd buy at safeway. That is to say it was way too doughy, and the cheese was rubbery. Oh how I long for the Pizza Azzuro of home. Why isn't there a decent traditional Italian style pizza place around here? —NicholasKnoblauch

2007-01-27 22:57:57   i saw something about them on the food network and will no longer purchase pizza any where else. truly inspiring :O) on a side note i also heard that the teenage mutant ninja turtles purchase their pizza from these guys too :O) —EmilyTung

2007-04-25 16:50:43   We all like Papa John's pizza, the kids working there are always helpful and courteous, even when the customers are being NASTY! Especially one kid working there, I think his name is Adam, he always keeps his cool and is super polite too - a nice touch in a fast food place like this. —DavisGradStudent

2007-11-05 13:18:31   I just love the pizza so much and the price is not bad at all. But, I was very dissapointed with the employees, they were not really friendly. I said thanks to them and say good night, and they did not say anything, they just ignored me. I believe, I did nothing wrong, I felt so bad because I just told by myself. Can you guys smile a little bit please? —viviancute

2008-02-13 20:22:05   I have been working there since October of 2007. We used to be ok but now we are under a terrible new manager. none of the managers are skilled enough to do their jobs properly (Except Maria) and one of them is a god damned illiterate. Illiterate and still makes $1.25 more than me. He only got the job because he knows the manager through the manager's cousin. For the love of humanity, spend your hard earned money elsewhere. —AndresRuiz

2008-07-19 22:22:19   I just got home from a 23 mile bike ride and was hungry for some pizza. Looked through the assortment of pizza coupons I had and decided to try Papa John's. Called in my order, was put on hold, then some guy (i forgot his name) took my order. Couldn't get the coupon right, but eventually my order was placed and I was told it would be ready in 15 min. Went to go pick up the pizza and when I got there it wasn't made and they said it "wasn't in the system" They asked me which number I called, I couldn't remember the number off hand because it was on the coupon sheet and I called it from my house phone. They offered to make it for me but didn't offer any further discount so I decided to go elsewhere. Sure enough when I got home and checked the number I dialed it was right. I probably should have gone to Pizza Guys, I've never had a problem with my order there. —DavidHolcomb

2009-01-17 21:40:10   This is the best pizza of the ridiculously cheap pizzas, as long as you have a coupon. They are also very speedy on the delivery (and as I remember, the delivery guys aren't bad looking either). It's a regular greasy tradition in my house to buy cheesy bread - always a good decision. —caitlinpolly

2009-10-30 15:34:33   There has been several changes over the years. With the current Executive Management our goal is to bring back the good days of pizza and strive for excellent customer service going forward. We appreciate all of the folks in Davis, especially the Students and the UCD Campus. Also we very much appreciate the folks who live in the local community year round. We hope to bring you a quality pizza with a good value. —PapaJ

2009-11-30 07:43:01   they are good, they work hard and they are much cleaner than some other pizza places in town. people stop complaining about prices, yes a large pepperoni pizza is $15, but go ahead and get one from some other places with same quality then camper the price. and Andres i remember you working there too, you weren't a good worker like some of our shift leaders, however you sucked! and also Maria sucks too as well, but sadly she can not go anywhere else. —bigO

2009-12-05 16:11:58   For some reason in the last month the website for the Davis location does not accept coupon codes that I get in my email each week. I called in and management apparently hasn't changed...they honored it over the phone for me instead. —OliviaY

2010-05-04 20:34:59   I'll tell you a reason not to get 2 pizzas... i called in just now to order a pizza for pick up, and they wouldn't take my order claiming they were too busy! I've had small problems multiple times from this papa johns, and they're receiving less and less of my business. I've never heard of a pizza place doing this! I like their pizza.... but come on... what place is too busy to take an order, especially when i'm asking to pick it up and not putting a drain on their delivery drivers. —marshvz

man that shopping center is struggles on the side tenants, at least it is anchored with the co-op —StevenDaubert