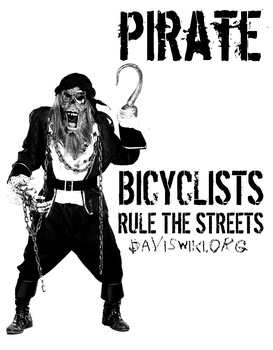 Pirates don't like cars (you can tell because you can't really sail a car). Anonymous inside sources at the Human Pirate Alliance told us in advance that scores of pirates planned on reclaiming the streets of Davis from the car driven humans on Friday, September 28th, at 6pm. The pirates met at Central Park at 5:30 pm by the big oak tree to prepare their bicycle cannons, arrrrrgh!

Our sources also tell us that this was only a defensive action against the car invasion and should not be viewed as aggressive in nature, rather meant to reclaim stolen pirate seas. Humans who unfortunately find themselves car driven at the moment of this action should remain calm. The pirates will not curse when approached. Drive slowly as if your children were playing in the street. Honking soothes the pirates. Honk if you love the pirates. Encourage the pirates to ride their bicycles. The pirates will be less of a menace to civil society the faster they get to the Putah Creek.

This may be an annual event. This page has nothing to do with the Zombies Reclaim the Streets page or Critical Mass.

2007-09-19 15:18:23   To de plank with dose nasty zombies. de streets arrrrh ourrrrs. ninja's arrrrh cool as long as dey ar not vs the pirates. If you arrrrrh and enemy of my enemy (zombies), den ya must be me friend. —RobertMcMurry

2007-09-24 10:43:00   Bicyclists are not seen as the underdog in Davis. To win the PR war, you can't be overreaching or else there may be blowback. Davis is a town where redress still works and the city council still listens. Direct peaceful protest should be the second to last step - this is not necessary in the current political atmosphere of davis. Participants are detracting from possible advance. You must take the highest road still available. Don't do this ride... —ChristopherMckenzie

2007-09-24 10:54:12   While I won't be riding...I live in Sac and also usually walk everywhere...I never thought of these events as a protest against a certain policy, but more of an awareness campaign. Car driver's attitutdes towards bicyclists, I believe, is what these events are trying to change....not a law.

I have seen one of these in Sac recently...made me miss Davis. —JamesSchwab

2007-09-29 23:15:29   How do I get in touch with someone who helps organize the Pirate Bicylists reclaim the streets, Zombies, Critical Mass, etc? Would love to do a story on them! Please email me at [email protected] —Cary Arnold