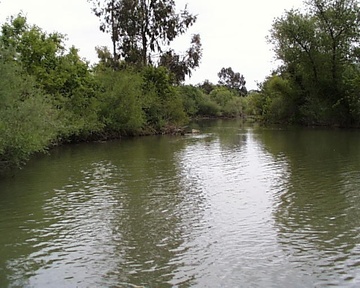 Putah Creek is the primary drainage for the UC Davis campus, forming a not so vital link in the hydrological cycle between mountain and sea, but a very vital link between mountain runoff and farmers. The portion of Putah Creek moving through UC Davis is the lowermost reach of a creek that drains a large watershed originating in springs on Cobb Mountain. Putah Creek flows through Middletown and eventually empties into Berryessa Reservoir. Below the Putah Creek Diversion Dam, Putah Creek is diverted for use in Solano County and UC Davis before flowing through a levee-controlled channel past Winters, south of Davis and terminating in the toe drain of the Yolo Bypass. Lower Putah Creek, which once supported over 22,000 acres of lush riparian forest, has been modified over the years into a regulated stream following an unnatural channel and supporting many introduced species of plants and animals. Putah Creek's main channel was historically its north fork, which runs through campus (the present day UC Davis Arboretum). For flood control, the Army Corps of Engineers diverted all of the flow to the south fork, which is obviously the new main channel.

Despite its concrete walls, the Putah Creek channel passing through the UC Davis Arboretum enhances the beauty of campus. As the channel widens in front of Mrak Hall, it is called Spafford Lake — every few years, this section of the channel is drained for cleaning, and many stolen bicycles are recovered. All storm water runoff from the UCD campus ends up in the Arboretum. The new UC Davis Waste Water Treatment Plant discharges its effluent into the south branch of Putah Creek, just west of Old Davis Road. Moving across to the west of Highway 113 the original creek channel appears as a depression wandering through Spieth Reserve.

The Putah Creek Council is probably the most important local-issue Environmental Organization. For more information on the history of Putah Creek, see The Putah-Cache Bioregion Website.

In 2008, the state of California fined UC Davis $78,000 for pumping too much pollution into the creek from its campus sewage treatment plant. 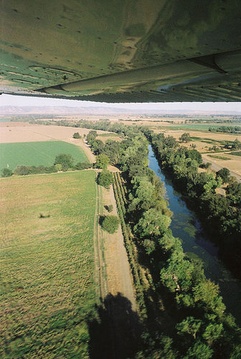 Putah Creek From Above (c) arlen, '04 The original name for the creek, as given by the local Native Americans who once lived beside it, sounded something like "Liwaito" or "Leywe" according to 19th century texts written by people of limited familiarity with the Patwin language.

"Putah" descends from "Puto", which is the name that the Spanish settlers gave to the local Native American tribe. The Spanish name for the creek was therefore "Rio de los Putos", meaning River of the Putos. Due to the fact that puta and puto in Spanish mean "female whore" and "male whore", there has been much speculation over whether or not these names were meant to be intentionally offensive. The Native American tribe in question referred to themselves using a word which sounded something like Puttoy to the European settlers' ears; therefore "Puto" may or may not have represented an honest but unfortunate attempt to transliterate the original term to Spanish.

For some reason, the local people decided to shorten the name and change Puto to the feminine form of the noun around 1845. However, the United States Board on Geographic Names found Puta obscene, and therefore the "h" was placed at the end.

At one point the people who lived here harvested Tule reeds that they used to build tule houses.

In its early years, Davisville was periodically flooded by high flows from Putah Creek and by 1872 efforts began to divert Putah Creek away from the city. A new channel, the south fork, was dredged and is the channel we now know as Putah Creek as it passes the southern periphery of the UC Davis campus. The concrete levees on both sides of the creek bed result from this dredging, which was expanded by the Army Corps of Engineers' over the course of 1943-1949. The channel straightening caused Putah Creek to cut downward, leaving a channel 10-20 feet lower than the original stream bed. When Monticello Dam began operation in 1957, the down-cutting ended with flood waters being stored in lake Berryessa. Though the cement-lined canal meandering through the Arboretum, the Arboretum Waterway, follows the original creek bed, it has no natural flow and acts more like a pond than a creek.

During the 1987-1992 drought, the south fork nearly dried up several times, when flow from Monticello Dam and Berryessa Reservoir to the channel was cut off by the Solano Irrigation District. During this period, water in the Arboretum Waterway was maintained solely by effluent from UC Davis aquaculture facilities and the sewage treatment plant. Flows were reluctantly restored only after the Putah Creek Council got involved and, with the assistance of the university and Alhambra Water, actually purchased water to keep the creek alive. This situation resulted in a lawsuit filed by the Putah Creek Council, the City of Davis and the university. The creek was awarded additional water flows but the decision has been appealed and the battle to keep Putah wet continues.

Putah Creek is a wonderful and close place to spend some time outdoors. There is decent bass fishing and great carp fishing in the section of creek from the UC Davis Picnic Area downstream to the stillwater below Old Davis Road. The water of lower Putah Creek is clearest in the spring and early summer. The late summer buildup of algae and vascular plants earned Putah Creek the song title 'Green River' by the band members of Creedence Clearwater Revival about spending their summers swimming in the creek.

Good swimming spots exist wherever waters are deep enough to swim. Many cyclists enjoy plunging into the cold waters of the Winters Swimming Hole after making the 14-mile ride. This swimming hole benefits from a rope swing which hangs from a large creek-side sycamore tree and plenty of spots for sun bathing on a defunct concrete dam. Those less inclined to make the trip to Winters can find slightly-warmer, but still refreshing, spots to swim within the UC Davis Riparian Reserve.

The reserve's first master plan was completed by it's founding director, Kerry Dawson.  He also served as campus Professor and Arboretum Director overseeing the reserve's first research planting of hundreds of valley oaks in the area just above Old Davis Road.

A majority of the northern levee of Putah Creek is open to the public for walking, running, or bicycling. Closer to the creek, trails within the Putah Creek Riparian Reserve are great for hikers, walkers and joggers. While in the Riparian Reserve remember to watch out for poison oak and be advised that bikes are not allowed and dogs must be on-leash. 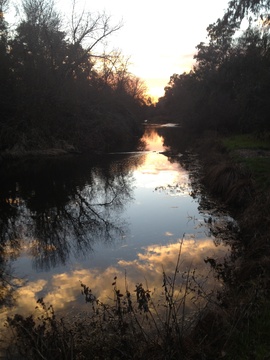 Muskrat Sunset(c) Mikey, '12 The riparian reserve is an excellent place to see some of the more worthwhile town wildlife. Bird watching is quite good, as the riparian vegetation is an oasis for birds in a sea of treeless ag and urban lands. In spring, California State Endangered Swainson's Hawks use the creek's large trees for nesting. River Otters and Beavers can be spotted on the banks of the creek. The Arboretum is also great place to see ducks copulate. It is worth noting that many of the weedy banks surrounding the river are known for Ticks.

There is decent bass fishing and great carp fishing in the section of creek down to the UC Davis Picnic Area and the stillwater below Old Davis Road. Upstream from Lake Solano up to Lake Berryessa is a great wild and hatchery raised trout fishery.Greg Bonovich is a flyfishing guide on Putah Creek. 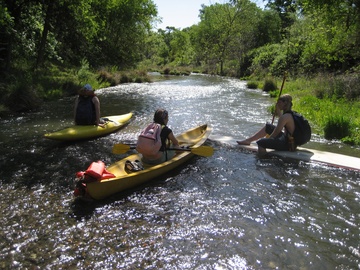 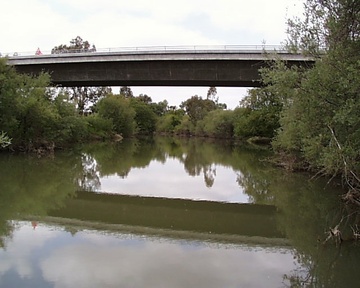 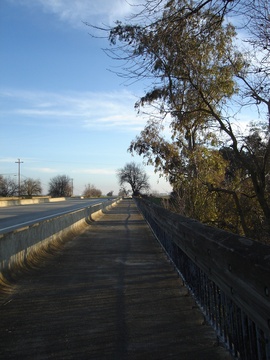 View when standing on County Road 98 bridge over Putah Creek

A popular boating trip done by many Davis youth whom have participated in Camp Putah starts from the picnic area at Putah Creek Riparian Reserve. This trip takes the boater about 10-15 minutes downstream on flat water to "the rapids". At a sharp right bend in the river, get out and walk or float downstream. The water here is usually about 1-3 feet deep and somewhat swiftly moving. About 75 feet after the bend the river takes another sharp turn to the left and takes all who are floating through bushes that form a tunnel over the river. It is easy to get back on your feet and do "the tunnel" as many times as you want. There are some good blackberry bushes on this section as well.

Several items below should be noted.

Check out the Putah Creek Boulders.

2008-10-08 17:34:59   The creek that runs through UC Davis is really ugly in my opinion, though the surroundings are awesome. Why don't they turn it back into a running creek? It seems like some running water would make it look so much better. —TimJ

2012-02-09 18:46:16   I saw some sort of mammal swimming in the creek today. It didn't swim like an otter. It swam like a beaver, but seemed to small to be a beaver and I didn't see a big tail. Somewhere between a large rat and beaver in shape and appearance. I posted a picture of it above, though it's very small in the photo. It went beneath the surface when I approached. Any thoughts as to what that could be? —MikeyCrews