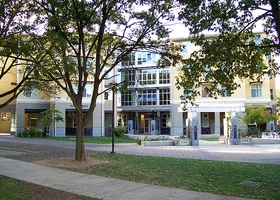 The three buildings in Segundo North are:

Segundo North (sometimes called merely "The Infill") is the name given to the new dorm area of Segundo at the corner of La Rue Rd. and Anderson Rd. The buildings represent a new thought in dorm life and the aesthetics behind it. Rooms are double and triple occupancy, with four rooms sharing a bathroom. The four rooms are known as a Cluster. Floors in each building have approximately 60 residents each. The new Tercero South dorms are built in this same style.

The construction of Segundo North caused great distress and chaos to the 2002-2003 class living in Malcolm Hall and also to some extent, Ryerson Hall. Residents were forced to wake up to jackhammers for 3 months straight, every day at 8 AM (and sometimes earlier), as well as the sounds of other construction equipment for the entire academic year. There was a large mud problem around the building due to heavy equipment being moved, and in the warmer months, huge clouds of dust and dirt. The path to the building's side bicycle parking and stairwell was sometimes closed. More seriously, there were many complaints about construction workers intentionally looking in the windows of the upper floors, with negative results if a girl forgot to close her curtains, as well as some crude men telling very dirty jokes and pseudo cat-calling when ladies were parking their bikes by the building. While residents did get an extra goody bag of gifts during finals to 'make up for it', most all felt frustrated and annoyed with the entire issue. Segundo North was built on top of a former parking lot for Ryerson Hall.