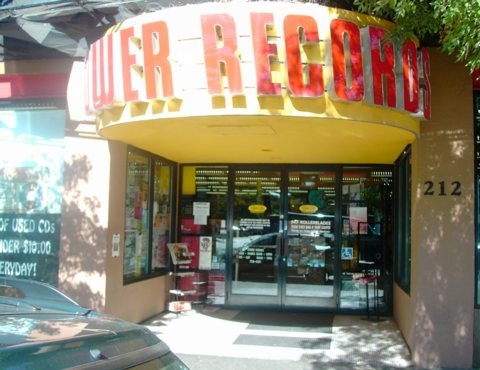 Tower Records was a medium-sized (relative to Borders Books & Music) music store chain spawned from Tower Records at 16th & Broadway in Sacramento. Like most other Tower Records, our Davis location offered new/used CDs, DVDs, albums, posters and magazines in addition to smaller items such as CD cases and blank recording media. Tower was also a Ticketmaster outlet.

According to Wikipedia, the company filed Chapter 11 bankruptcy in August 2006 and was sold to Great American Group on October 6, 2006, who liquidated all of Tower's brick-and-mortar assets in the US by the end of the year. The Davis location ran up to a 40% to 60% discount on everything in store (finally making some CDs affordable), and was even selling fixtures. The Davis store closed for good sometime between November 21st and Nov 30th, 2006. Dimple Records opened at the same location and also eventually closed.

Michael Moore, when visiting Davis to speak at the Mondavi Center, went to Tower and skipped out on Armadillo Music.

Tower Records was the lame corporate record store in town. Sure, they might have had 30,000 CDs and 10,000 DVDs, but who doesn't these days? Used CDs, posters and magazines aren't exactly unique features either! Plus, they were in cahoots with those cronies over at Ticketmaster. Not to mention some of their employees were quite elitist and they always made you put your bag behind the counter! How lame. At Armadillo Music the employees are much friendlier and you can try out any CD in the store! Plus it was usually cheaper. The only good part about Tower Records was that Tom Waits has shopped there before, and purchased a David Banner CD. Although Waits also ventured into Armadillo.

I worked at Tower. We're not lame, I promise. I actually think the employees there are pretty cool not to mention that the permanent employees are extremely knowledgeable about our respective genres. Also, Tom Waits does shop at Tower, he came in some time last summer and I recognized him and rang him up for a really awful David Banner CD (Mississippi: The Album). As for Tower being a lame chain store, it started in Sacramento several decades ago as a small store not quite unlike Armadillo Music. I'm a fan of Tower. - KristenBirdsall

I try to avoid corporate record stores, but the only serious vinyl shopping to be had in Davis is at Tower (aside from picking through Loggins & Messina and Seals & Crofts LPs at thrift stores). Tower have a decent-sized vinyl section, but no-one seems to oversee it—it's usually in serious disarray. They have sections for Rock LPs, Hip-hop singles and LPs, and Electronic LPs. All the used LPs are in roughly alphabetical order in the top of the racks and jumbled with new vinyl of all types underneath the racks. If you have time to pick through you can find some great stuff, some of which is pretty obscure, and some of which is rare (such as german pressings of Beatles' albums or first pressings of Johnny Cash). So far, okay. My biggest problem with Tower is this: a number of albums have two price tags on them. At least twice when I've taken an album with two price tags up at the front, I've been told that the price is actually the higher price, and that the lower price was put on there "by someone who wasn't trained" or "on accident." At which point I've registered my displeasure and told the clerk that I didn't want th(os)e album(s). This price discrepancy is not noted anywhere. Very lame. EDIT: They seem to have stopped doing this "higher price thing" recently.- ErikNoftle

—As nothing more than an expensive cd store, Tower had nothing left to offer the consumer. Wall-Mart & Target took the market share by offering better prices, Borders offers better service (previewing) and Amazon offers all of the above. Not to mention the cd industry is slowing down, partly due to the widespread growth of mp3 stores-Peter Anselmo

2006-10-13 19:17:10   The Sac Bee for the past week or so has been covering the demise of Tower Records. The Sacramento base chain has declared bankrupt and is currently being liquidating. Decent deals I hear, albeit sad because Tower was such a notable brand. —KarlaFung