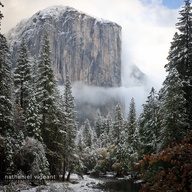 Yosemite National Park, located about 180 miles southeast of Davis, receives over 3 million annual visitors who flock to the park for its immense waterfalls, steep cliffs, lush forests, and spectacular scenery. The park was one of the first Federally-protected reserves and was set aside in 1864 through an act by President Abraham Lincoln. Today, most of the park is protected through Federal "wilderness" designation and the park was declared a World Heritage Site in 1984.

As one of the most popular national parks, Yosemite is accessible through multiple forms of transit.

By Car Yosemite is about 3.5 hours southeast of both Davis and the San Francisco Bay Area. While there are several ways to access the park, the most popular and direct is via Highway 120, which leaves I-5 near Manteca. Highways 41 and 140 also serve Yosemite Valley from the south and east, respectively, while Highway 120 crosses the park's high country en route to Mono Lake and Nevada. Rental car services are also available at the Fresno-Yosemite Airport.

By Bus Amtrak and the Yosemite Area Regional Transit System (YARTS) offer service to Yosemite Valley and the surrounding cities on a year-round basis.

Most visitors (90%, in fact) flock to Yosemite Valley to see glacier-carved valleys, polished cliffs, waterfalls, streams, meadows, forests, and wildlife. However, the park also includes several other areas that, because of their seasonal closure to automobile traffic, receive far less visitation yet contain some of the world's most unparalleled beauty.

Yosemite valley is home to some of Yosemite's most popular and recognizable attractions. The immediately recognizable 'Half Dome' is located at the far east end of the valley and towers 4,737 feet above the valley floor. Glacier Point is situated just to the south of Half Dome and is considered one of the most popular viewpoints for looking out over the valley from an elevation of 7,214 feet. Yosemite Falls which is located more near the center of the valley drops a astonishing 2,425 feet making it the sixth tallest waterfall in the wold. And El Capitan which is a massive wall of granite, rising abruptly at almost a perfect 90-degree angle to the valley floor. El Capitan stretches almost 3,000 feet from base to summit and is a wildly popular recreational spot for rock climbers from all around the world.

High Country and Tuolumne Meadows Yosemite's high country is home to Tuolumne Meadows, which bursts with wildflowers and lush grasses during the spring and summer seasons. Highway 120 crosses this area en route to Mono Lake and Nevada and is only open in the summer and fall. Other points of interest include Tenaya Lake, Tioga Pass, and the various domes that dot the landscape.

Hetch Hetchy The Hetch Hetchy area features the Hetch Hetchy Reservoir, formed by O'Shaughnessy Dam in 1923, and the Tueeulala and Wapama Falls. O'Shaughnessy Dam was built on the Tuolumne River after the area received protection as a National Park and drowned what John Muir called Yosemite's "twin." The area provides access to various trails that traverse the Grand Canyon of the Tuolumne. Today, there is talk of removing the dam to restore the valley. Hetch Hetchy can be reached via Evergreen Road, which leaves Highway 120 just west of the park's Big Oak Flat entrance.