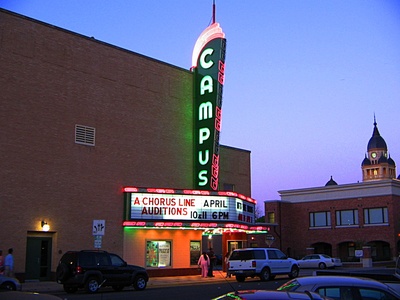 The Campus Theatre, located near The Square on Hickory, was built in 1949 in the popular art deco style. The theater was a popular gathering place for university students.

The Campus Theatre hosted the world premier of Bonnie and Clyde, with Warren Beatty in attendance. It showed its last film in 1989 and sat empty until 1994 when the Greater Denton Arts Council purchased it and mounted a campaign to restore the building and open it as a live performance venue. Over $1.8 million was raised and the building was restored to its original splendor. Texas Woman's University art students restored the art deco paintings on the interior walls, the original carpet was matched, and a stage and dressing room were added. Since opening, the Campus Theatre is booked over 300 nights a year and is home to eight performing art groups. It is owned by the Greater Denton Arts Council and managed by Denton Community Theatre.

Don't touch the metal stars on the wall of the lobby unless you want to get cut by one. These do stick out and have cut at least one person's hand deeply. 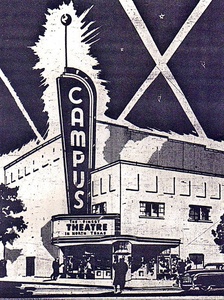