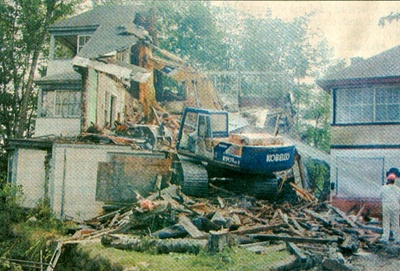 SARANAC LAKE — The village of Saranac Lake is using federal grant funds to rid itself of a potentially dangerous house that has been abandoned for years.

Village Board members on Monday voted to buy the 28 Front St. property, demolish the house and sell the lot to the next-door neighbor, who reportedly wants to build a recording studio there.

"It's jammed with furniture, it's rat-infested — it's just been abandoned for years," Village Manager Howard Riley said.

Village trustees had questions about the liability of the village in owning a derelict property, but Community Development Director Debbie McDonnell assured them that the village would not hold it for long.

"I hope to buy it, tear it down and sell (the lot) in 30 days," McDonnell told village officials Monday night The current owner, Mary Wilbur of Saranac Lake, has agreed in writing to sell the property to the village for $1,000. The village would spend another $25,000 to $35,000 in demolition, McDonnell said.

Jeff Oehler, of 26 Front St. next door, has agreed in writing to buy the land from the village for $10,000 and has reportedly made a down payment. The village would use about $4,000 from the sale toward unpaid back taxes from the last three years, McDonnell said. The remainder would go toward the village's 5 percent match for the grant.

The project is part of phase 2 of the village's Helen Hill Redevelopment Project, administered by McDonnell and funded with the help of a $400,000 grant from the U.S. Department of Housing and Urban Development.

Oehler's recording studio, Beehive Productions, was once located in the old Overhead Door building, behind the village post office, but is now without a home.

In this case. McDonnell said the village helps itself by helping a neighbor get a good deal.

"As is the case with many people in the North Country, this guy doesn't have the money to tear (the house) down himself McDonnell said. "I think we're going to see the benefits come back in taxes over the next couple of years.