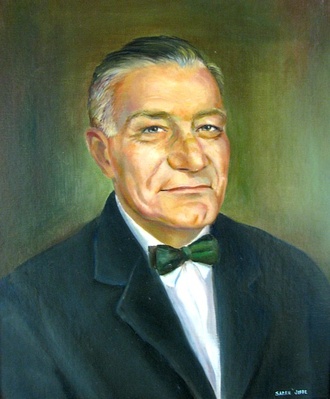 Dr. Carl G. Merkel was a general and thoracic surgeon at the General Hospital of Saranac Lake for many years. He served as the hospital's Chief of Surgery from 1964 to 1981, and as President of the Saranac Lake Medical Society in 1951. He also served on the School Board during its period of centralization in the 1960's. 1 Dr. Merkel's mother, Emma Heise Merkel, was a sister of Dr. Fred Heise. When Dr. Heise died without heirs, Dr. Merkel came to Saranac Lake to settle his uncle's affairs, and decided to stay.

SARANAC LAKE - Dr. Carl G. Merkel of 160 Park Avenue, a pioneer in special methods of chest surgery and a top surgeon at the General Hospital of Saranac Lake for the past 38 years, died at the hospital Monday afternoon. He was 75-years-old.

Dr. Merkel practiced medicine for nearly half a century, spending 37 of those years in Saranac Lake. Seven months ago his friends and colleagues took time out to thank him for his contributions to the hospital and to the community in a special ceremony.

At the ceremony, fellow surgeon and partner Dr. Alfred M. Decker made special note of Dr. Merkel's work with thoracoplasty — a type of chest surgery performed to collapse a diseased lung. He said patients came from all over the world to get the help Dr. Merkel could offer.

Anesthesiologist Dr. David Rowell added that not only patients but fellow doctors made the trip here to watch Dr. Merkel perform the special surgery.

Hospital Administrator John Murphy added his praise, saying Dr. Merkel "had done a remarkable job as a talented surgeon and a sensitive and compassionate physician." He said Dr. Merkel's work as a surgeon was, in great part, responsible for the good reputation the local hospital has in the Northeastern medical community. He also took awarded Dr. Merkel a citation from the Medical Society of the State of New York. The organization, too, was noting Dr. Merkel's many years as a physician.

Commenting on Dr. Merkel's death today, Murphy said, "It's difficult to recognize in a paragraph or two the strength of a man who masked so eloquently his softness and compassion under a stern expression.

"For those of us in the hospital who knew him, saw him every day and exchanged pleasantries, he will be missed."

The Northeast, and particularly the Adirondacks, first drew Carl Merkel to this area in the 1920's and 1930's for vacations. His love of the area led in 1946 to his joining the thoracic surgery practice of Dr. Warriner Woodruff on Church Street.

He became a member of the General Hospital medical staff in 1946 and served as the hospital's Chief of Surgery from 1964 to 1981.

He was elected president of the Upstate Society of Thoracic Surgeons in 1952.

He also served as chairman of the Saranac Lake Chapter of the American Red Cross in the mid-1950's.

Active in many community activities, there was a time in the village when the words Pee Wee Hockey and Merkel were nearly synonymous. He was instrumental, working with Nick Mitchell, Thomas Cantwell and others, in forming the Saranac Lake Pee Wee Hockey Association in the early 1950's.

By the early 1960's he was actively involved with the local school district as it embarked on centralization and was a member of the school board from 1960-70.

He also found time through all the years of helping others to spend moments in more private pursuits such as birdwatching, reading (especially Shakespeare), water and snow skiing, and hunting.

He suffered a mild stroke about a year ago, but recovered and continued to perform surgery until his retirement in March.

Among family members surviving Dr. Merkel is his son, David, who continues the family tradition in surgery at the local hospital.

He had his elementary and secondary education in Baltimore schools and did his undergraduate work at St, John's College in Annapolis, Md. in the late 1920's. He graduated from Johns Hopkins University School of Medicine in Baltimore in 1933.

Dr. Merkel was a veteran of the United States Navy and Marine Corps and served in the Navy's Medical Corps and the Marine Corps from 1944 to 1946 before coming to Saranac Lake.

The Fortune Funeral Home is in charge of funeral arrangements. There will be no calling hours, but a public memorial service will be held at 2 p.m. Saturday at St. John's In the Wilderness Church, in Lake Clear. The Rev. John Fitch of Saranac Lake will officiate.

A private interment service will follow in St. John's Cemetery, with the Rev. Paul Merkel officiating.

Memorial contributions may be made to the Saranac Lake Free Library or the General Hospital in care of the funeral home.