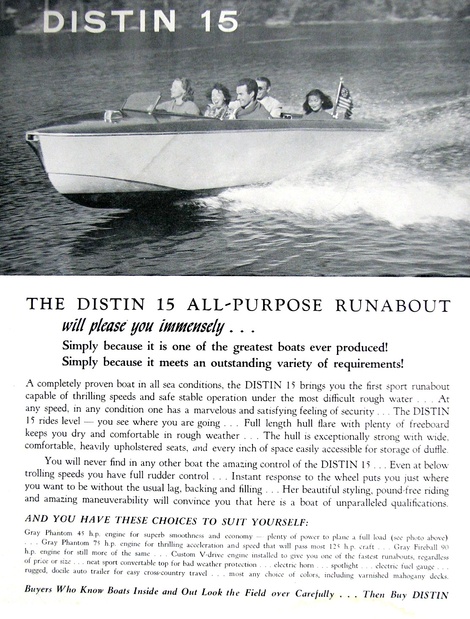 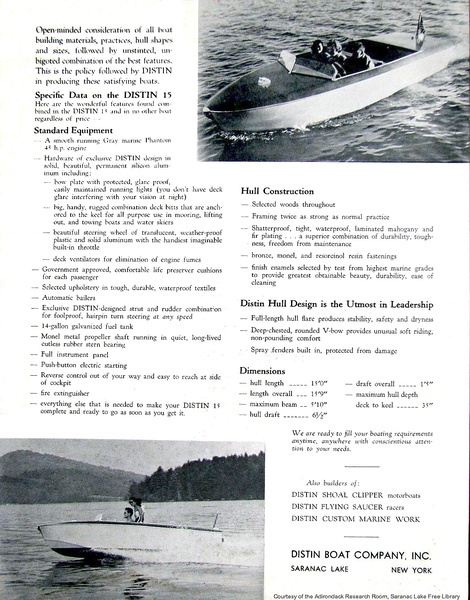 Two boats, featured product of the Distin Boat Co., of Saranac Lake, are among late model crafts on display at the annual boat show now going on at the Grand Central Place in New York city.

Robert G. Distin and his brother, William G. Distin, owner and partners of the concern, left Saranac Lake yesterday morning with their display models to place them on exhibit at the show which opened last night and continues for one week.

The boats which were built at the company shop on Church street extension are the Distin-15 foot runabout and the Distin Shoal Clipper.

The former has a 54 horsepower Gray Phantom motor and is styled as a pleasure craft. The Shoal Clipper has a one and a half horsepower aircooled inboard engine. Both are designed and built to a high naval architectural standard.

(Special to the Daily Enterprise)

VALLEYFIELD, Que., July 17 —Bob Bogie of the Distin Boat company, Saranac Lake, will be high on the list of favorites when he races his Blitz II in the inboard contest here tomorrow afternoon.

The Valleyfield regatta, annual summer boat racing event, opens the Canadian circuit for the British- American Oil company cup. A series of 12 races will be run off within the next two weeks.

The racing contests conclude around Labor Day at the Canadian National exhibition in Toronto, Ont.