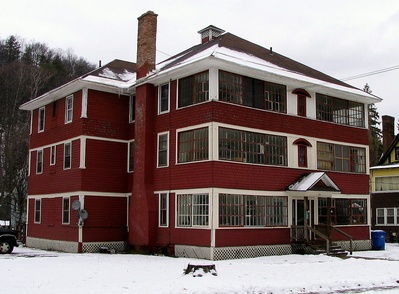 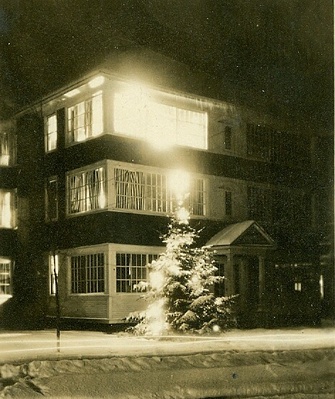 Other information: Built by Edgar T. Coleman. Now the largest surviving example as a commercial private sanatorium designed and built as a single unit, with all of its 18 spacious sleeping porches integrated into the original design concept; it could house as many as twenty-five TB patients. In its early years it was used as a cure cottage for the National Vaudeville Artists, who offered its facilities for NVA members, whether entertainers or backstage workers. After the National Vaudeville Artist built the Nation Vaudeville Artist Lodge , it was operated by Alfredo Gonzalez for Latin American patients.

One of its patients was the Colonel Mario Vargas, chief of staff of the Venezuelan Army. He was visited there by Venezuelan President Romulo Gallegos on July 10, 1948, a visit which drew a crowd of more than 300 to the airport in Lake Clear when he arrived; a picnic was held in his honor at the Guggenheim Camp on Lower Saranac Lake. 1

It was sold to the American Management Association in 1957 by Alfredo Gonzalez, who had owned the building since 1932.

The Gonzalez Cottage is listed on the National Register of Historic Places as a contributing element to the Cottage Row Historic District.

THE GONZALEZ BUILDING SOLD TO THE A.M.A.

The Gonzalez Apartment building at 80 Park ave., was sold today to the American Management Association, which will use it for staff members. The negotiations were made through the Thomas P. Ward real estate agency.

Mr. and Mrs. Alfredo Gonzalez have owned the building since 1932 and for many years Spanish-speaking people from all over the world stayed there while being treated for tuberculosis.

Mr. Gonzalez noted, this morning that a President of Venezuela had visited a patient there, a Colonel Vargas, and that several senators end congressman from Cuba had stayed there as well as other prominent people from Latin America.

The house, which has six large apartments, was the home of the National Vaudeville Artists, predecessor of Will Rogers Memorial Hospital, in the 1920s. It was used then as a sanitarium. Mr. Gonzalez first came to Saranac Lake in 1920 from Puerto Rico as a patient, and in 1926 married a Cuban girl who had come here with her niece.