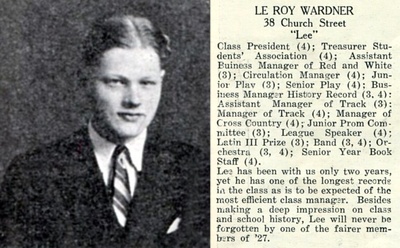 One of our readers comments: "Not only did the beloved Dr. Wardner deliver my younger sister in 1958, but he delivered my two daughters in 1975 and 1977. He was a wonderful man and after my first child was born, he asked me what he could do for me. I told him I was very hungry. A few minutes later he arrived by my bedside with a brown bag lunch for me."

In 1938 he married Carolyn Ward Potter at St. John's in the Wilderness in Paul Smiths. After practicing family medicine with his father in Saranac Lake, he completed, his internship at the Hartford Hospital and his residency at the University of Pennsylvania. In 1949, the couple moved to West Hartford, Conn. where he practiced Obstetrics and Gynecology at the Hartford Hospital for 35 years.

Wardner delivered more than 6,000 babies 1 and was on the forefront of women's issues including planned parenthood, legalized abortion, and childbirth education.

Doctor Wardner was also a part of the Beaumont Medical Club of Yale University and the founder of the Wardner Family Historical Association. His other interests include music, history, genealogy, gardening, and the love of the Adirondacks.

No funeral arrangements or call hours were listed at press time.

Memorial contributions may be made to the Hospice of Northern Virginia, Woodbridge, Va. or Historic Saranac Lake, Saranac Lake.

PAUL SMITHS — Over 70 members of the Wardner Family met for reunion at Paul Smith's College recently.

All are descendants of Philip and Katherine Wardner, who landed in Boston, Mass. from Germany in 1752. They came from 14 states and represented eight different lines of descent.

Seventeen were former residents of the northern counties of Clinton, Essex, and Franklin of New York. They were delighted at the beauty of long-remembered mountains, forests, and lakes.

All were impressed by the 577-page genealogical volume, Wardners in America, compiled and organized by Carolyn Wardner Buck of Portsmouth, Ore., formerly a resident of Bloomingdale. Published in July, 1992, it records over 1,850 descendants by a unique system of letters according to order of birth distinctive and exclusive for each individual.

The oldest in attendance was octogenerian LeRoy H. Wardner, M.D., who practiced family medicine in Saranac Lake from 1937 to 1946 in association with his father, Dr. William A. Wardner.

1. This may be an error— his father is said to have delivered 6,000 babies in Franklin County; it would seem odd if his son attained exactly the same figure