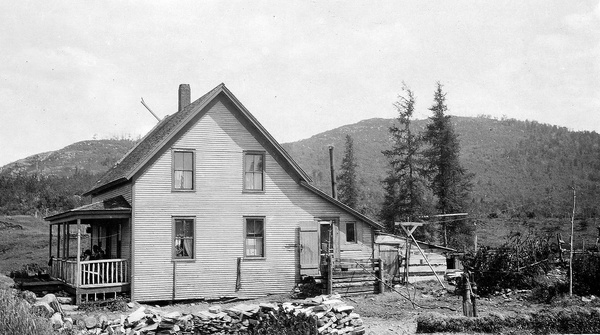 The station at Meno, with the section tool house at right. This would house a speeder (pump car) and the tools the section gang would use to maintain the tracks. ICC photograph, c. 1918.Courtesy of Tim Mayers 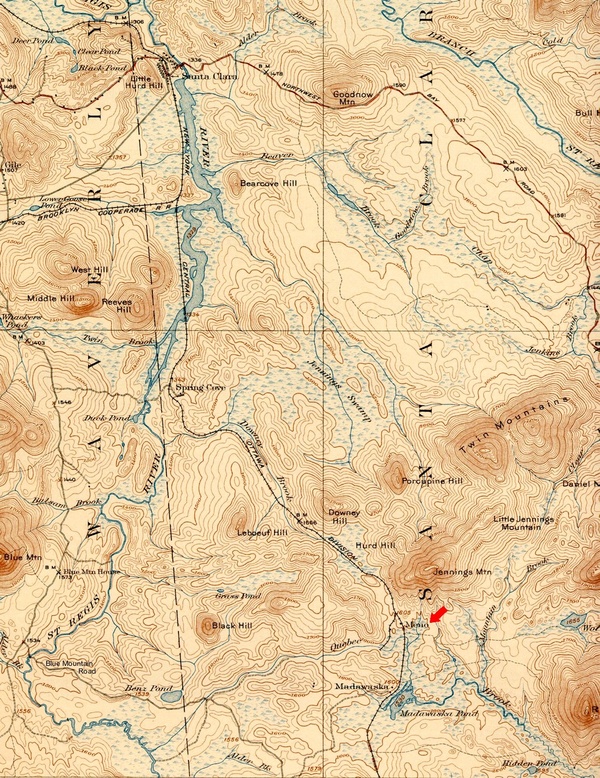 Train station at Meno, ICC photograph, c. 1918
Courtesy of Tim Mayers Meno was a community north of Madawaska, six miles north of Keese Mills. It was the site of a railroad station of the New York and Ottawa Railway, and a bridge belonging to the Brooklyn Cooperage Railroad.

It was destroyed by the forest fire of 1921.

Tupper Lake Free Press, February 4, 1937 (from an account of the death of 94-year-old Tupper Lake resident Delia Gauther at the home in Meno of her daughter Mrs. Louis Vicello.)

...Meno is located on the New York and Ottawa line, about 28 miles from Faust and there is no access there by road. Once a busy point on Hurd's Railroad, Meno consists of only a house or two today,— a flag stop on the N. Y. & O...

The greatest forest fire damage yet reported in this county took place in Sunday's gale about ten miles south of Santa Clara. Fanned by the stiff wind, the forest conflagration, which begun near Benn's Pond west of Meno, started up again after being put under control earlier in the week and soon got beyond control of the small number of men left to guard it. The flames traveled with incredible speed, and, in spite of the fact that additional forces were sent to fight them, the little hamlet of Meno, a lumber station on the New York & Ottawa R. R., was almost completely destroyed before these men arrived.

Only the railroad station and one of the Brooklyn Cooperage Co.'s storehouses remained standing. The property consumed included the dwelling houses and contents of Section Foreman Antonio and Fred Rhoades, a building occupied by section men, the school house, sand house and tool house of the Cooperage Co., the 200 foot wooden bridge of the N. Y. & Ottawa R. R. at that point and the 50 foot bridge of the Cooperage Co.'s railroad. Eight head of cattle were driven to a place of safety but Antonio lost 30 hens and several pigs. Hundreds of cords of pulp wood belonging to the St. Regis Paper Co. were also destroyed. No trains can be run on the N. Y. & O. R. R. beyond Meno until the bridge is repaired.

After crossing the railroad the fire, traveling at the rate of seven miles an hour, swept up Rice Mountain and burned clear through to the Meacham road, endangering the house on the Sprague farm and the Hogle Fox Farm. A shift in the wind enabled the fire-fighters to keep the flames on the west side of the road. Some valuable timber was destroyed on the Sprague and Skinner farms and about 60 cords of wood belonging to E. E. Hogle. Yesterday the fire, was well under control with little damage to the fox farm unless there should be a shift in the wind. At Madawasca the summer camp and property of James Eccles were also in great danger, and the lumber camps of the St. Regis Paper Co. west of Meno.

Supt Clark and B. E. Ames, railroad, superintendent of the Brooklyn Cooperage C., Martin Favro, Warren Farmer and the latter's brother had a decidedly narrow escape Sunday noon on one of the branches of the Cooperage Co.'s railroad in the vicinity of Meno. Flames reaching a great height swept toward them and they were finally compelled to immerse themselves to the neck in Quebec brook for an hour, where they suffered much, from heat and smoke. In their flight ahead of the flames they met two Polocks, who were reported to have persisted in going up the trail toward the fire to their camp, but later it was learned that they remained with the others and were unharmed.

The families burned out at Meno were taken to St. Regis Falls, where they were cared for by the residents.

Other fires were reported Sunday east and southeast of St. Regis Falls and another two miles west of one of the Cutting camps. St. Regis Falls was practically stripped its male population Sunday, all being out fight to save valuable property in that region and all industrial plants were closed on Monday. The Bellmont fire which threatened Ingraham Pond timberland was veered by the wind toward Chateaugay Lake, and a 15-minute shower helped the fire fighters considerably in coping with that blaze.

Yesterday no improvement was noted in the region of St. Regis Falls, Santa Clara and Madawaska. Though Eccles' camp had not been burned the fire which swept the north side of Rice Mountain Sunday shifted easterly over the top and south side threatening the Rockefeller preserve between Madawaska and what was formerly Brandon village. This big fire is now said to extend over a 30 mile front. Many more men were sent to aid the 200 already fighting fire in the Meno and Madawaska sections. Every available man in villages and on farms in Waverly and Dickinson was sought for fire fighting service.

Three fires broke out in succession near Everton Monday and Tuesday, so near each other that there was suspicion that they were not accidental. A force of over 30 men was sent from St. Regis Falls to fight these fires which threatened timber lands of the Brooklyn Cooperage and St. Regis Paper companies and of Reynolds Bros. & Co. Observer Parks on Blue Mountain had reported 29 fires up to yesterday noon.

The fire on the Boyce tract in Bellmont is under control but a new fire has broken out southeast of Ragged Lake on lands of the Delaware & Hudson R. R. Co. which threatens much good timber growth.