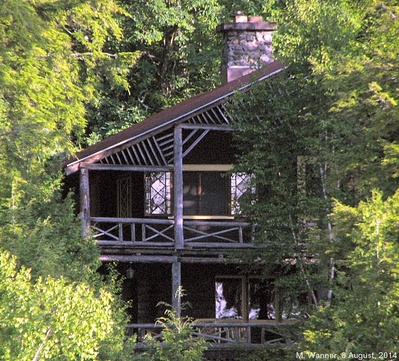 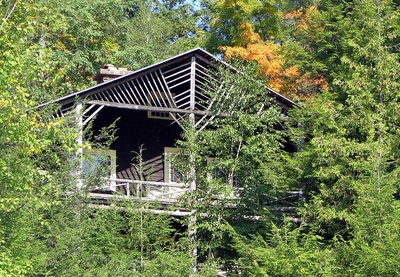 The camp was one of Coulter's first commissions after moving to Saranac Lake in hope of a cure for his tuberculosis. The camp is located on Upper Saranac Lake near two other Coulter Great Camps, Prospect Point Camp and Camp Eagle Island.  It was built in 1898 of logs cut on the property 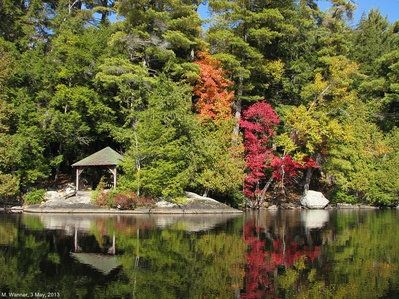 This gazebo, at the eastern edge of the property, sits on a conservation easement given by Herbert Pollock in memory of his wife, who was fond of picnicking there.The name is taken from a nearby rocky, moss-covered ledge that still is a notable feature of the shoreline. The camp consisted of a main lodge, guest house, dining hall, boat house, and, some distance from the rest, a tea house built on a promontory overlooking the lake. The buildings are constructed of unpeeled logs; some are notched-corner style log cabins, others are shingles over plank walls. The style is similar to nearby Camp Pinebrook, another Coulter design.

The camp was given to the Girl Scouts and then to Syracuse University in 1948. It has been in private hands since 1971.

The camp was included in a multiple property submission for listing on the National Register of Historic Places and was listed in 1986.12

The Jesse Warren camp on the western side of the lake was purchased last year by Miss Balantine of New Jersey. She is making additions to the dining room and sleeping apartments and Improving the grounds, altogether to the extent of $7,500. 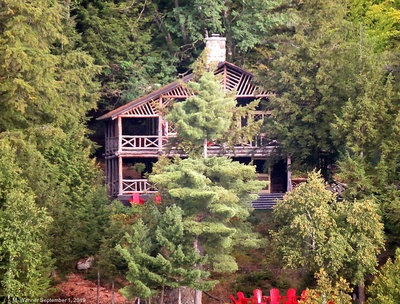 Moss Ledge from Gull Point after a restorationa

Moss Ledge is shown at the top center of this 1912 map of the southern part of Upper Saranac Lake.New York Times, July 2, 1911

Wawbeek, NY. Miss Isabel Ballantine of Newark, N.J. is coming within a fortnight to open Mossledge, her rustic camp on the bay. 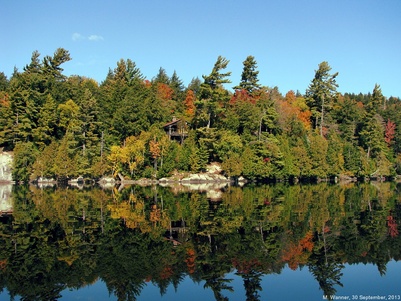 1. National Register of Historic Places Nomination Form (pdf)
2. This article appeared originally on Wikipedia as Moss Ledge; its edit history there reflects its authorship. It is licensed under the GDFL.