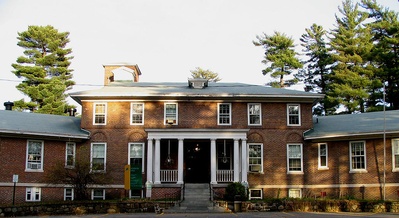 Founded in 1967, North Country Community College serves Franklin and Essex County; it is the only public college located within the Adirondack Park. The main campus is in Saranac Lake on the site of the old General Hospital at 23 Santanoni Avenue. There are branch campuses in Malone and Ticonderoga.

Enrollment is about 1800 students. The college employs 143 permanent and 300 adjunct faculty, and provides programs in the Liberal Arts and Sciences as well as in Allied Health, Business, Technical, and Vocational areas. The college is associated with the State University of New York.

It inherited its Radiologic Technology program and several business courses from the Saranac Lake Study and Craft Guild when that organization closed.

The first day of classes was September 16, 1968 and the first yearbook, called Aurora, was published in 1969.

I remember the early days of NCCC as I was a student way back then. In 1969, the only building the college had was Hodson Hall, or what we now know as the old hospital. I was late in applying to the school in my senior year. Due to this, and being late to register for classes, all my classes for that first semester were in the evening.

Since/the college only had one building and there weren't enough classrooms in it, we had classes all over town. I remember well my General Psychology class, taught by William Butterfield and held in the Cantwell Room in the library. I took Music Appreciation taught by George Reynolds, in the basement of the Methodist Church. My Western Civilization class was in an empty storefront in the Hotel Berkeley, taught by Robert Klein. And my only class at Hodson Hall was English Composition 101.

That first semester, I became very familiar with Betty's Restaurant, which later became Alice's. Since I didn't have a meal plan at the college and Betty's was close to all my classes, I had many meals there. They made the best burgers, fries and hot turkey sandwiches!

And, of course, my roommate and I had many meals at Dew Drop's on the weekends They made the best pizza in town.

A year or so later, the college acquired the old elementary school across from what is now NBT Bank; they named it River Street Hall. In it were four classrooms, the student lounge and snack bar. I had classes there as well. And who could forget the old armory on River Street, which was the original college gym?

Eventually, the college got the campus it needed, and this campus has worked well for many years. When I went to Empire State College some years ago, I used NCCC's library many times. It was a far cry from the original library in Hodson Hall! And now, after all these years in Saranac Lake, the college wants to move?

The college certainly had humble beginnings. But it started in Saranac Lake, and it should remain here. The school should find ways to better utilize the buildings. Why not try one of SAGA's suggestions and bring back evening classes? If they had evening classes in 1969, they can certainly have them now. NCCC is an asset to Saranac Lake. If it weren't for this school, I and many others living here might not have gone to college. Let's find creative ways to keep it here.