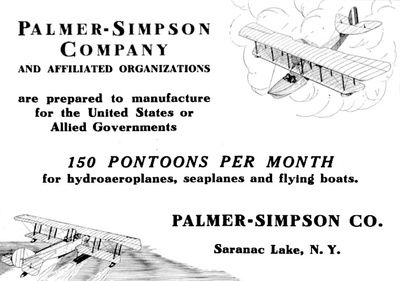 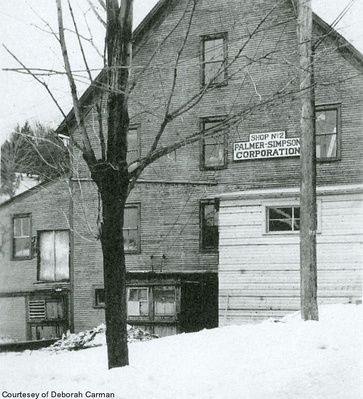 Palmer-Simpson Shop No. 2, c. 1917 The World War I Hydroplane Industry in Saranac Lake

It was uncertain at the beginning of World War I that aircraft would be useful in wartime, and when the war began there were only about 180 aircraft in use in the Allied forces. These were primitive machines and were mostly used for reconnaissance.

In September 1917, five months after the United States entered the war, the navy committed itself to operating air stations on the coasts of France and Ireland from which seaplanes (or hydroplanes)—airplanes that could take off and land on water—would patrol the submarine-infested Atlantic waters through which American troop and supply ships were to pass. One of the models approved was the HS-2. This hydroplane was 38-feet long with an overall wingspan of 74 feet, weighed 6,500 pounds, and carried one engine, two pilots, two 230-pound bombs, a machine gun, and a radio. It could travel at a maximum speed of 85-miles-per-hour for up to 4.4 hours. 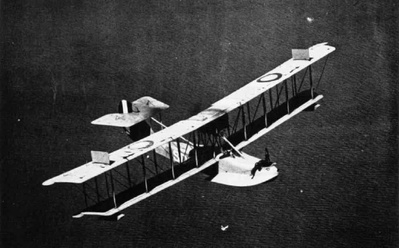 A U.S. Navy Curtiss HS-2L flying boat during the First World War. Note that the observer in the bow has just dropped a message, visible below the plane.

HS-2 hydroplanes were ordered from six manufacturers across the United States, most of them on the East Coast. Working with them to provide parts were nine subcontractors. One of these was the Palmer-Simpson Company of Saranac Lake, created to build hulls (bodies) and pontoons for the hydroplanes. The company's principals were Carl Palmer and  Dwight S. Simpson, both tuberculosis patients in Saranac Lake. Simpson was a thirty-four-year-old naval architect trained at Cornell University who, before coming to Saranac Lake, had been in charge of the Essington Ship Yards at Philadelphia. It was he who designed the specific patterns used by Palmer-Simpson.

A building on Lake Street formerly used by William A. Martin, a well-known Adirondack skiff builder, was leased to house the factory; later on, additional space was found in the O’Brian building on Olive Street. The company received its first contract in June 1917; in December it received a second contract. Saranac Lake was considered a good factory location for hydroplanes. For one thing, many of its men were skilled guideboat builders and thus familiar with the techniques required for the construction of the lightweight bodies and pontoons of these craft. For another, the building material to be used, Adirondack spruce, was close at hand. By April 1918 nearly one hundred men were employed at Palmer-Simpson, working around the clock in eight-hour-shifts. The Plattsburgh Sentinel announced on April 23 that two “flying machines” had just been shipped from Saranac Lake, and that the product of the Palmer-Simpson factories “is given preference over all other goods in their shipment by rail from Saranac Lake.” 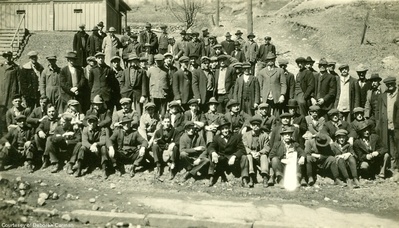 Palmer-Simpson Workers. Palmer is in the front row; Simpson is in the second row, left of center, with a pipe in his mouth. c. 1917

By September 1918 all air stations at home and abroad had a full complement of hydroplanes, and shipments abroad were temporarily stopped. In November the war ended, and with it Saranac Lake’s fledgling hydroplane industry.

One thousand, one hundred and ninety-one HS-2 hydroplanes were built in the United States during the war, of which 229 were shipped overseas. Naval flying operations made a contribution to winning the war. It was reported that in the waters near the Loire region of France, for example, the Allies lost one ship per week before the aerial patrol service was started, most of them destroyed by submarine torpedoes. Only three ships, however, were lost during the entire final ten months of the war when the aerial patrol service was in operation. 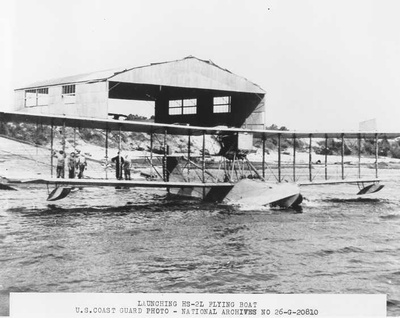 The Adirondack Enterprise says that there is in Saranac Lake an industry which may be multiplied ten times in the extent of its operations, number of men employed and output, is a fact which was brought to the attention of the members of the board of trade at a meeting held at the Berkeley hotel on Friday night. The industry is that of the Palmer-Simpson Company, which is engaged in the manufacture of pontoons and hulls for aeroplanes. As a result of the discussion which took place at the meeting a special committee consisting, of Dr. F. E. Kendall, Phelps Smith and C. J. Ayers will take up the request of the Palmer-Simpson Company for local cooperation and assistance to obtain a suitable factory building. It is possible that the industry may be developed to give employment to 100 men. This would include men of the Adirondacks who are skilled in the making of Adirondack guide boats and also skilled mechanics from distant points. 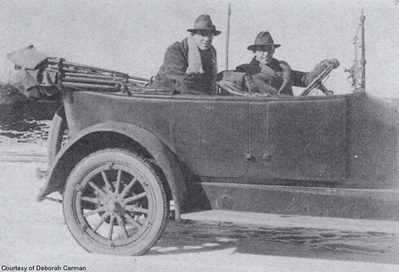 Saranac Lake is to have a new industry, the building of pontoons and hulls for aeroplanes and flying boats, for which the Board of Trade of the village is planning to provide a site. It is expected that at least 100 men will be employed, including those skilled in the manufacture of Adirondack guide boats and other mechanics. The Palmer-Simpson Co. expects to close a contract with the government for two flying boats a week, with the prospect later of larger orders. Each flying boat will be 32 feet long, four feet wide, equipped with wings on each side and will carry two engines. The boat will plane on the water and rise in the air as the speed increases and will be used by the navy. It is planned to continue their manufacture after the war for business and pleasure purposes. 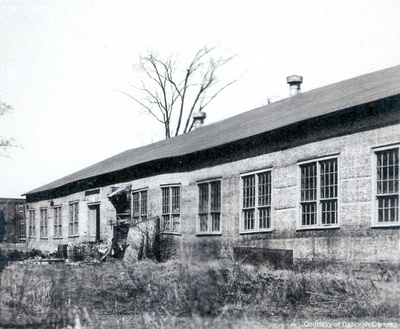 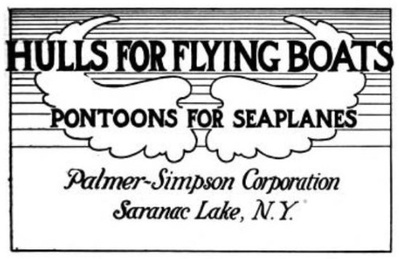 L. R. Baker, formerly employed in the Curtiss aeroplane factory, is the new superintendent at Saranac Lake for the Palmer-Simpson Co., which is to build hulls for hydroplanes under a contract with the government. The Curtiss aeroplane for which these hulls will be made will have a wing spread of 59 feet and a length over-all of 38 feet 6 inches, and will be operated with the new Liberty motor. Nothing but hulls will be made at Saranac Lake, but the Palmer-Simpson company's contract calls for all the hulls can be manufactured and at least a hundred men will eventually be employed if not more. For the present work will proceed in the boat shop on Lake Street and in the O'Brian building on Olive Street and new machinery is being installed at both places. In the spring the company expects to erect a new factory building at the Lake. 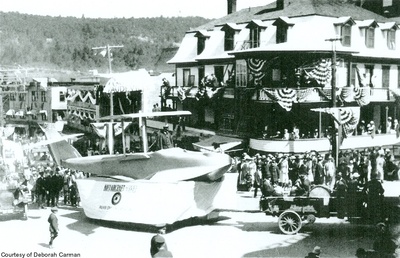 Palmer-Simpson parade float in front of the Berkeley House, 1918 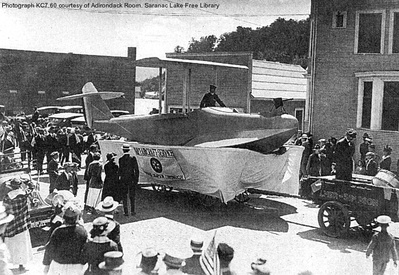 William Kollecker photo of the Palmer-Simpson parade float in a parade held to promote the sale of Liberty Bonds in 1918. Adirondack Daily Enterprise June 4, 2011

Few people are aware of the fact that at Saranac Lake there is a plant in operation where flying machines are being manufactured for the use of the war department in the present war, two of the machines being shipped from that village yesterday. The manufacturers of the machines are Palmer & Simpson, and they have two factories in operation at the Adirondack metropolis, and are now giving employment to over one hundred men. The factories are being run day and night, the men working in eight hour shifts. The capacity of the shops will be increased as rapidly as skilled workmen can be secured. The principal factory is located in the building formerly used by Martin, the famous Adirondack skiff builder, and it is equipped with the latest machinery. The air craft is completed to the smallest detail at these factories, and before shipment are carefully inspected by representatives of the government. The product of these factories is given preference over all other goods in their shipment by rail from Saranac Lake.

Currier Press founder Alfred Currier worked at Palmer-Simpson while attempting to cure his tuberculosis; it was Beanie Barnet who suggested he seek employment there. 1

2010-04-13 09:24:31   We'd certainly be interested in anything you find! You don't happen to know where on Olive Street the company was located do you? Most of the available information on this topic is about the plane, with Saranac Lake's part in it amounting to a footnote! Please feel free to add any detail that you can, either directly on the page, or by emailing me at [email protected]. Thanks.