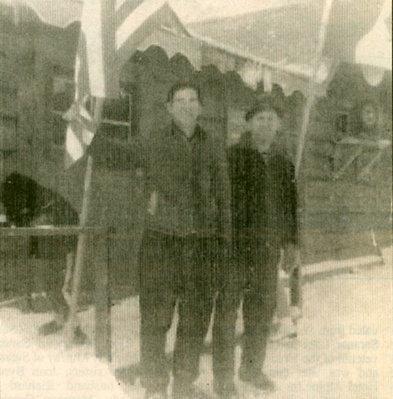 The old warmup hut with Al "Bing" Kunath and George Bedore. George said he liked to have Bing there because he was always so nice to the kids.... Well, he had a lot of practice; he had 12 of his own. The Petrova Rink was an extremely large skating ring created each winter from the 1930s until 1979 on Petrova Field for use by village residents. Among the many speed skating stars to skate there was Richard Donovan, who skated in the 1924 Winter Olympics.

The name Petrova is from the famous Vaudeville Actress Olga Petrova, for whom the High School, the Rink and the Street were named.

Back in the '50s, '60s and '70s, Saranac Lake boasted the biggest artificial outdoor ice rink in North America, and no one challenged that claim. It was located on Petrova Avenue, and the last great event held there was the World Barrel Jumping Championship in February of 1973. The championship was sponsored by National Winter Sports Inc. of New York City. Irving Jaffee was the managing director of the organization, he is remembered here as the winner of the gold in the 5,000-meter speed skating event in the 1932 Olympic Winter Games in Lake Placid.

George Bedore the master ice maker, ran the skating for all those years. He has been praised over the years for his dedication and hard work, but it was his knowledge of how to make ice that many people overlook. There was a lot of preparation long before one stood out there in 20-below-degree weather, flooding the rink with a fire hose. You can bet, also, that he spent a lot of hours there that never showed up on his paycheck.

Thousands of spectators lined the LaPan Highway and Petrova Avenue and the surrounding fields to watch the barrel jumping. After all, Saranac Lake was home to Ed Lamy, who held many speed skating world titles but was probably best remembered as the world's barrel-jumping champion. Sports champions then, as now, attached their names to the equipment they used, and Ed was featured in an ad for A.G. Spalding's Blue Streak Skates, with a picture of him jumping barrels.

Mr. Jaffee sent George Bedore a letter of thanks after the 1973 championships which read, in part: "We want to thank you for your outstanding cooperation in making this year's championship so successful. You and your associates did a championship job, and we are all proud and grateful." It is a very touching and gracious, old-fashioned trait that Irving Jaffee took the time to sit down and send this handwritten letter of thanks and praise to someone who helped him, because George Bedore's role as a village employee could have been so easily taken for granted. 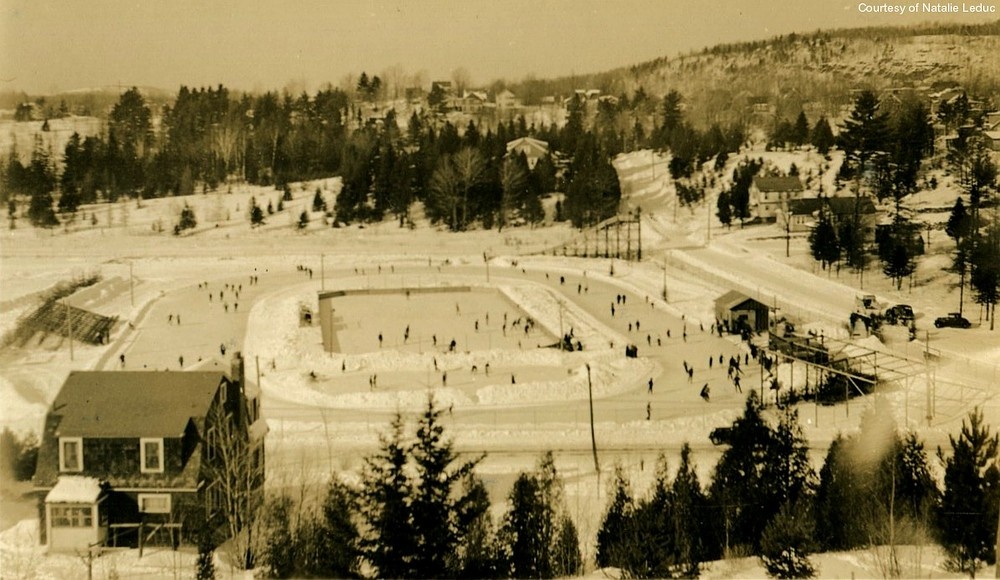 The rink at Petrova, 1930s, before the LaPan Highway was built and School Street ran from Olive Street through to Petrova Avenue

The Eastern Seaboard and North American Speed Championships had also been held at that giant ice rink, but it is most remembered in the hearts of thousands of Saranac Lake kids who spent thousands of joyous hours there just skating for the pure fun of it Just ask Keefe, Kurt, Keegan, Kasey, Kean and Kelby Riley, who spent so many hours there and would sometimes skate down the sidewalk to the rink from our home at 60 Petrova Avenue.

It seemed to spell the end of that wonderful era when the old wooden warmup hut, with stove in the middle of the room, was torn down and that ugly metal building erected at the edge of the field, right across from the Oldfield family home. It totally blocked their view, was a terrible thing to let happen, and today it would not have been allowed to happen. However, that is why that building is there, to replace the warmup hut, with two bathrooms, a storage area and a garage on the end to park the then-green jeep with the broom on the front that kept the rink clear.

Building and maintaining that rink was a very labor-intensive undertaking. There were no unions, labor was not as costly, and there were men who would stay up all day and night in subzero weather flooding the rink. It could not be done in one hosing; it had to be layered and frozen and then flooded again. The big problem would occur when there would be perfect ice for two weeks, and then a week of warm weather would hit. The ice would disappear, and the process — with the accompanying labor and expense — would start all over again. It was a much bigger job, but remember what it was like building the Olympic bobsled run before it was refrigerated. ... talk about labor intensive. How many races were canceled when the weather turned warm?

There have been many efforts over the years to bring back the Petrova rink, and I don't believe anyone has tried as hard as I did the first year I was village manager to do just that. The minor things are installing a fire hydrant and lighting, but the big factor is now the cost, especially with overtime, which workers did not receive in the past. The school board doesn't want it because they are afraid it will ruin the field, which is not true. Others point to the existence of the Saranac Lake Civic Center ... but that is for hockey and figure skating.

Mr. Bedore said he went to the school board with a group of people to get permission from the board trying to bring the Petrova rink back. They were unsuccessful, but that group did have some success improving the rink next to the civic center. It is very tough to keep that kind of facility going with all-volunteer help.

If anyone intends to undertake this endeavor again, it should be understood that the village not only can use that field for the rink, they do not even have to ask the permission of the school board. There is a letter on file in the village office from school attorney Robert White, so stating. The stipulation was made in the contract when the village gave the land to the school.

There were also two hockey pens on the perimeter of the rink, and George insisted that I shoveled more snow than any mayor in the North Country trying to keep the pens clear for the evening pee-wee games. So George honored me (much like the Herb Brooks honor in Lake Placid) and named one of the hockey pens for me, with a cardboard plaque and everything, but when I drove by that next May it had all disappeared.

Athletic Association Says It's Too Costly to Maintain

Saranac Lake Athletic association, sponsors of the village's winter sports program, has aroused the ire of many hockey enthusiasts with its decision to abandon ice hockey this winter. The association believes the sport to be on the wane in Saranac Lake and too costly to promote, but lovers of the game, who are ardent backers and in many instances members of last year's team, intend to seek a showdown on the reasons why that particular sport should be eliminated from the program. The point to other sports that have been financial losses but are still scheduled on the year around program.

The group backing ice hockey will appear at the next meeting with requests that the hockey team be continued. Expressions from the group reveal the beliefs that last year's team would be considerably improved and strengthened by the experience of last season and would be in a position to play more games against better teams. It has been pointed out that hockey was permitted to die in Saranac Lake for five or six years before being revived last season.

The association is of the opinion that crowds will not be attracted to outdoor games because of the severity of the winters in this section. Officials of the group say that if an indoor rink were available hockey could be put back on a paying basis. In past years, Saranac Lake had strong teams that played before large turnouts. The sport was abandoned about 1929.

Last year a hockey pen was built on the municipal field and was used for both high school and town team games. The high school has had teams during the past two seasons.

Whether or not the association will take action on the request for hockey could not be learned from its officers. There has been no appropriation for the sport and should the hockey group be successful in forcing the issue money would have to be taken from sums allocated to other sports.

Saranac Lake Village Manager Miller Johnson set a ground crew to work last week laying out a six-lap track to be used for the North American speed skating championship races in that village February 11, 12 and 13. The track will be located on the municipal field. Its long side will run parallel with Petrova avenue and it will circle the baseball diamond. The hockey pen, formerly located in the center of the rink will not be put up this winter because of the new sodding on the infield Manager Johnson won't chance damage to the baseball infield, so a new location will be found for the pen.

Electric lights mounted atop poles will flood, the rink with light for night time skating. The public address system, for announcements and music will also be placed in position soon after the field is flooded. The electric lights used at the rink were loaned to the village by the New York Telephone Company, Manager Johnson said.

Johnson, Mayor Thomas P. Ward and Charles Goldsmith, winter sports director, are scanning almanacs, old guide weather prophecies and other available advance information on what kind of a winter is being predicted. Bert Hickok, who has lived in the Adirondacks more years than he will admit in public, told Mayor Ward that the heavy foliage in evidence during the past summer is a certain sign of a severe winter. The bumper crop of berries is also considered an unmistakable sign of plenty of cold weather, Hickok states. Last year's open winter ruined one of the heaviest sport programs ever planned by the community.