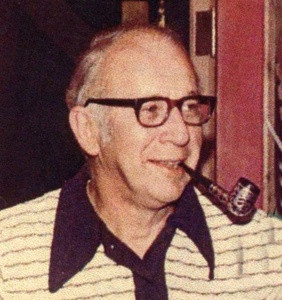 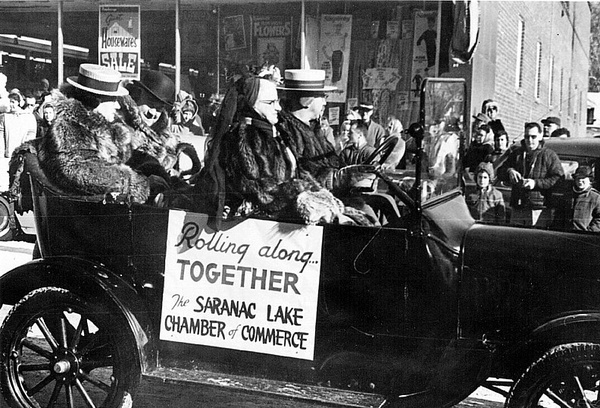 Model T Ford, "Jezebel" at a 1960s Winter Carnival Parade
Captioned: "Year ? 1962/2nd time Wolff was President."
Front seat: Phil Wolff- President C. C./ Harriet Finnegan Tres. C. C./Back Seat (Derby) Dr. Chester Boyton Ives/Stan Osgood- Bus. Mgr.- Will Rogers, Paul Smith/Trustee / C.C."
Courtesy of the Adirondack ExperiencePhil Wolff ran a greenhouse in Ray Brook and a florist shop in Saranac Lake for 40 years. He was a member of the 1976 and 1980 Winter Olympics bid committees, serving as chief of staff of the Lake Placid Winter Olympic Organizing Committee from 1978 until it was closed in 1987, the last three years as a volunteer. He headed the security committee for the 1980 Winter Games. He was the founder of the Lake Placid Winter Olympic Museum, and worked hard to preserve historical artifacts from the 1980 games. Wolff was instrumental in getting Lake Placid's 1932 and 1980 Olympic bobsled track named to the National Register of Historic Places. At his death, he was the oldest living licensed bobsled driver. He was inducted into the Lake Placid Hall of Fame in 2002.

He was a World War II veteran, having served in the Army Corps of Engineers in the South Pacific from 1943 to '45; he was among the troops sent to occupy Japan, where he visited Nagasaki just six weeks after it was destroyed by an atomic bomb. He was awarded the Purple Heart, Silver Star. Upon his return from the service, he started an Army Reserve unit at Paul Smith's College, serving an additional 17 years as an Army Reserve officer.

He was also a good mechanic who restored a Model T touring car that is now in the collection of the Adirondack Museum in Blue Mountain Lake. He was also an avid golfer, playing at the Saranac Lake Golf Club well into his 90s.

He had a camp on Kiwassa Lake in Saranac Lake.