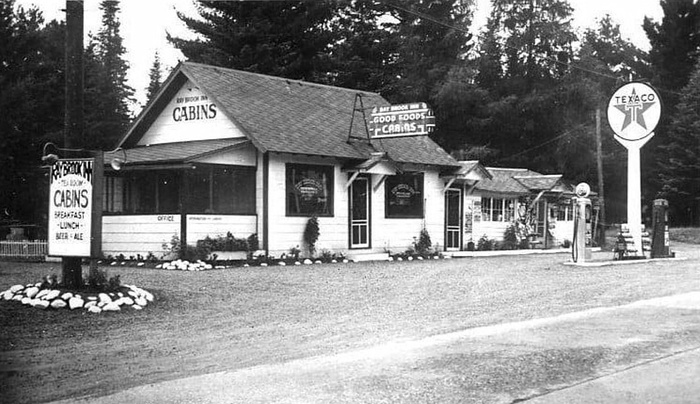 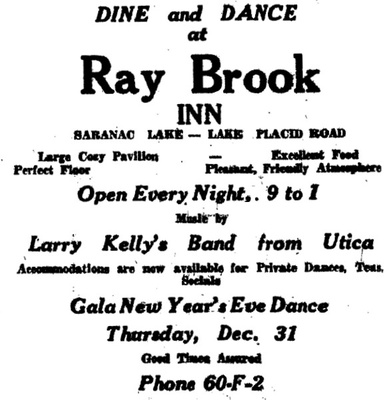 "In my story about the Ray Brook bars I had the name wrong - it was the Jacob Yoffe family, not Joffe, who had a bar and restaurant near where the Ford garage is located today...on the Placid side of Tail O' the Pup. None of my older brothers or sisters can remember the name of the restaurant, and yes, there were cabins also... my brother Ray, delivered milk there when we lived at the Oseetah Dairy. They had a daughter, Carol, who graduated from SLHS sometime in the 1940's." Howard Riley, email, 4/26/2013.

Howard Riley remembered later that it was the Ray Brook Inn that was operated by the Jacob Yoffe family, and others he talked to confirmed his memory. Howard Riley, email, 5/29/13

Ray Brook Inn, a popular dance resort midway between the villages of Lake Placid and Saranac Lake, will have an official opening for the summer season tomorrow night. Charles Heywood and his Blue Moon orchestra of Auburn, N. Y., will be at the Inn for the summer. Those who heard this peppy band during its trial appearance report that it will take its place among the better orchestras in the dance places of the vicinity.

Novelty favors will be distributed at the gala opening where the youthful followers of the dance will gather to make merry. The Inn which was open all winter, has made a strong bid with the young people of the Lake Placid and surrounding villages as a homelike place where they can stop in for a few hours of genuine enjoyment.

Miss Lydia Maxwell of Philadelphia and Miss Marion Fennie of Milwaukee, Wis., gave a dinner- dance at Ray Brook Inn on Tuesday evening for Miss Catherine Harwood of New York and Charles Lockhart of Plattsburgh, who were married here on Wednesday after noon.

The Inn, which was privately engaged for the thirty-two guests, was attractively decorated.

Members of the graduating class of the Dannemora high school and friends held their annual June dance at the Raybrook Inn located on the Lake Placid-Saranac Lake highway.

Sawyer and Lyon Come To Grief and Jail Term

Arrests brought about thru the presence of mind of a 13-year-old girl, two men were sentenced to 180 days in jail Wednesday by peace justice George A. Putnam.

The defendants, Kenneth Sawyer, 24, and Robert Lyon, 23, both of Otisville in the Paul Smith's section, were arrested on complaints of Mrs. Tema Yaffee of Lake Placid road and Orville Nason of Lake Placid.

Nason charged that while he and friends were repairing a tire of his automobile on the Lake Placid road Tuesday night Sawyer and Lyon drove up, and, claiming they were federal officers, searched his car, presumably for liquor. Both men wore grey uniforms and carried pistols, according to the complaint.

A few hours later Sawyer and his companion entered Ray Brook inn, where they again posed federal officers and demanded to see the license for operating the inn. They displayed their pistols there and threatened to wreck the place.

Catherine Yaffee, 13-year-old daughter of the inn proprietor, witnessed the disturbance and went out to the road where she took the license number of Sawyer's automobile.

As soon as the men left, the girl telephoned police headquarters at Saranac Lake and Patrolman Edmund Duprey located the men in the village. He turned them over to Sergt. Gerald Woolsey and Trooper Van Alstyne, who arraigned them before Justice Putnam on a charge of disorderly conduct.

Sawyer and Lyon are well known in this village. Shortly before they visited Ray Brook inn they were in Lake Placid flourishing their guns and talking about their new "jobs" as federal men. They were said to be somewhat intoxicated when they made their visit here.