The Sara-Placid Highway is the nine-mile section of New York Route 86 between Saranac Lake and Lake Placid.  It was designated the "Roosevelt Highway" in the 1920s and '30s.  Originally it followed the route that is now called the Ray Brook Road 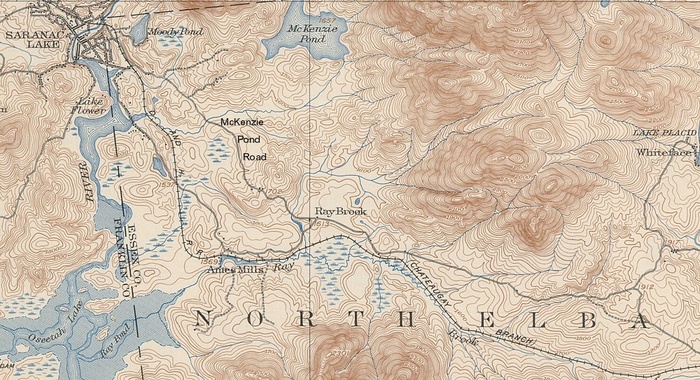 It is now announced that the Saranac Lake—Lake Placid improved road will not be constructed next year as heretofore contemplated by the state highway department, because it is a county road and the Essex county board of supervisors has decided to spend the money available next year along the Lake Champlain front instead of in the Western end of the county. This checks the plan of the village trustees and Good Roads Association of Saranac Lake to have Bloomingdale Avenue macadamized at state expense as a connecting link between state highways. 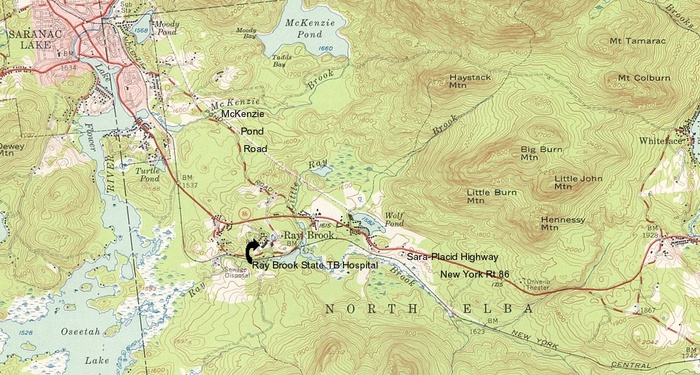 CONCRETE FOR THE SARANAC-PLACID ROAD

This newspaper is glad to add its voice in favor of a three-strip concrete highway between Lake Placid and Saranac Lake, when that broken-up road is finally rebuilt.

While officials have ruled for macadam highways within the confines of the Adirondack Park, it is believed in many quarters that concerted action on the part of the communities most affected may bring about a modification of the ruling so that what is undoubtedly the most-travelled piece of road in the Adirondacks may be constructed of concrete thirty feet wide.

Various Lake Placid and Saranac Lake civic bodies have passed resolutions favoring concrete for this road. Without doubt it will be built soon. Also without doubt it should be built of concrete, three strips wide.

The safety element on this highway, which during the height of the summer season is one mass of cars for about eighteen hours a day demands a wider-than-ordinary track. Motorists familiar with the three-strip road between Lake George and Glens falls or with the four-strip road running between New York and Albany know that both do much to lessen the number of accidents.

Enduring, smooth, safe concrete, thirty feet wide, along the ten-mile route between Lake Placid and Saranac Lake will be a needed boon to both villages, to this entire Adirondack section, and to the whole travelling public.

Let's get this road the way it ought to be!

At a meeting of Lee Irish, associate engineer of the Albany district of the state highway department with residents and officials of Lake Placid and Saranac Lake the proposed route for the new highway between the two villages was discussed.

The road will take the approximate course of the old dirt road leaving the present state highway a few hundred yards beyond Duprey's settlement of cabins and will extend back of Ray Brook sanatorium according to Willis Wells who attended the meeting. There was some discussion as to what approach the new highway would have into Saranac Lake. If rights of way are secured immediately and at reasonable cost the approach may follow Lake Flower avenue, coming out to the present highway near the N. V. A. sanatorium. The alternate would be the use of Pine street at the end of the old road. It is expected that a different roadbed will be made in the vicinity of the outlet here and upper portion of Saranac avenue.

Original Survey to Be Followed, According to Word Received by Hon. James Shea from Assemblyman Porter—Work Expected to Begin in August

Federal authorities have approved plans for the new Lake Placid-Saranac Lake highway, following the lines of the original survey, according to word received by Hon. James Shea of this village yesterday morning from Assemblyman Fred L. Porter. Mr. Porter had official confirmation of this action from officials of the State Highway Department at Albany. The new road will be considerably shorter than the present route.

The highway will be built from New York state's share of the Federal reconstruction appropriation of $3,300,000.00.

While Mr. Shea has no definite word of the exact date when construction of the highway will begin, it is believed that the contract will be let some time in August following the approval of rights of way and the necessary advertising for bids.

Mr. Porter assured Mr. Shea that state highway authorities would rush completion of the plans, and other work necessary to start construction.

Under the lines run in the original survey the new road will not go by the Ray Brook state hospital but will follow the old dirt road from Harder's Ray Brook house for some distance and join the present highway at a point this side of the D. & H. tracks near Turtle Pond, where, it is expected, an overhead crossing will be built.

Leaving Lake Placid beyond the outlet the new road will be lessened at Sterling Fox Farm by cutting into adjacent properties slightly. The new highway will then go by the old barn to the west of the present route and join the existing road near the junction of that thoroughfare and Carolyn road.

The curve beyond the Saranac Lake golf club will be cut down by going through the point north of the present road and coming out this side of the Ray Brook cabin development. This development will not be materially affected by the new highway, it is believed.

Late changes urged for the highway by many interested in its construction could not be approved, it was pointed out by Mr. Shea, since this would delay the beginning of work on the project. Mr. Shea, who headed a bi-village road committee of Lake Placid and Saranac Lake, has consistently backed action leading to the construction of this much-needed highway, has had the support of local and state authorities in his stand. Supervisor Willis Wells of Lake Placid, local village officers and leading citizens and officials of Saranac Lake, together with authorities, have joined in the effort to have the road built.