Bloomingdale Avenue runs from Broadway six miles northeast to Bloomingdale; it was originally called "Trestle Street". Like several other streets in Saranac Lake, it was named for its destination, as "the road to Bloomingdale." The corner of Bloomingdale Avenue and Broadway was the site of three hotels, the St. Regis, the Arlington, and the Alpine, once the tallest building between Albany and Montreal.

Parking Area and Wider Street for Boom in Business

When executives of the Grand Union Company decided to relinquish their central business section location in favor of larger quarters and better parking facilities for their patrons, they merely confirmed the judgement of a dozen local business men who had preceded them. The movement of business to Bloomingdale avenue has been decisive and continuous in recent years.

Long ago the late Henry Leis had built what was then a modern building on Bloomingdale avenue, with three retail stores on the street floor and two floors of apartments. John Morgan had preceded him with the construction of Saranac Lake's first brick hotel, the St. Regis. The old Grand Union hotel, of wood construction, was already located at Bloomingdale avenue and Depot street. 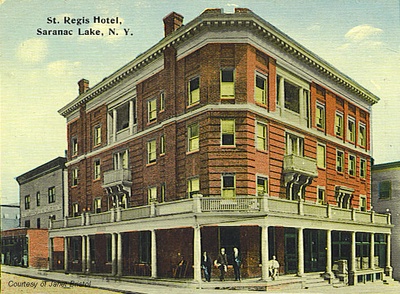 Hotel St. Regis, 1903 A while later the Potter block was uptilted and raised a floor to make a four-story and basement structure at Bloomingdale avenue and Broadway. William Distin was the architect. Then a fire in mid-winter took away the old Grand Union hotel, and Henry Ricketson of Plattsburg bought land and built the modern brick-and-steel Hotel Alpine, a six-story structure on Broadway, looking up Bloomingdale avenue, and he also built the brick-and-steel structure now occupied by the Food-o-Mat Super-Market of the Grand Union Company, opened for inspecting yesterday and open for business today.

Duprey Brothers built a large brick-and-steel garage building shortly after the Ricketson operations, and this was remodeled about ten years ago and put to use as Saranac Lake's bowling center. This was done by Ingleton Schenck, who still conducts the bowling alleys and also a bowling grill. The building was recently partly renovated and the Altamont Dairy Company has opened a modern dairy bar, its second in Saranac Lake.

One of the better and newer buildings on Bloomingdale avenue is a two-story brick-and-steel building designed by William Distin, architect, and occupied for a time by the late Harry Vincent, the owner. It was bought by Mr. John C. Boyer, and the ground floor now houses the popular Rainbow Bar and Grill and Casier's Utilities, Inc., dealers in fine home furnishings for kitchen and household metal needs. Mrs. Mildred Martin Hover and Miss Edna Boisseau have a beauty parlor on the second floor, and other tenants occupy apartments.

More recently a large automobile agency and garage building was built between the Boyer building and the Bowling center by Aaron A. Hoyt. The large display rooms show new models of the Kaiser Frazer line of automobiles, with a finely equipped garage and service station in the rear. A 24-hour taxi service is operated from the building also.

Following this building operation by several years came a reconstruction of a building owned by the Commercial Roofing Company, facing on Depot street but overlooking Bloomingdale avenue. The building joins up with the property occupied by the big Grand Union store at right angles, and overlooks a station operated by John Heimer. Across Bloomingdale avenue another service station is operated by Lawrence Stott. 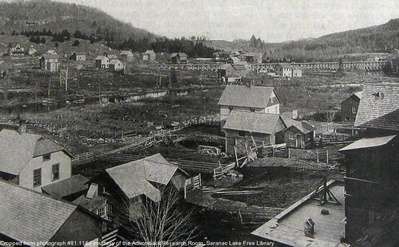 The train trestle for which the street was once named, in an 1894 view looking north from the Berkeley House to the Saranac River. "Adirondack Daily Enterprise, February 18, 2008

Next to Stott's service station is a large building which houses Vitullo Brothers, tailors and dry cleaners, and back of Vitullo's is the machine shop and battery service operated by Charles Barbata. The adjoining property was bought and reconditioned by the Knights of Columbus, and between this organization and the Elk's modern home is Mullens Cash Store, a modern market, operated and owned by Percy Mullen, who also owns the building.

Several years ago, Saul Drutz purchased the building between the Potter Block and the Bowling center, formerly occupied by the Empire Market, and reconditioned the property to house one unit of the Drutz chain of grocery stores. Mr. Drutz plans to build a new front to the building at a later date. Mr. Drutz owns the building, and H. Drutz, Inc., owns the business.

Across the street a thriving restaurant business has been in operation for many years. It is known as the Miss Saranac Diner, and not only has the most modern and largest diner in this part of the country, but has a brick annex restaurant for particular trade adjoining, built for its purpose. The diner is owned by Earl E. Campbell and Ernest M. Hoeth. The three large stores on the ground floor of the Leis Block are occupied by the Reis Pharmacy, owned by Charles P. Reis; the Bloomingdale Avenue Retail Liquor Store owned by Joseph L. Vuzzi and Paul Stephen and the D'Ambrisi Barber shop.

A smart restaurant and night spot, The Top Hat, owned by Michael J. Volk and John J. Labas, has been operating in the basement of the Potter Block for several years. The cooking is good, the decorations tasteful, and a bar off the foot of the stairway is smart and has its own entrance. The ground floor is occupied by the Mannis used furniture shop, and by Miss Betty Strong, hairdresser.

At the corner of Bloomingdale avenue and Church Street Extension, Neuman and Holmes painting and decorating contractors are reconstructing their building. A large addition to the Church Street Extension end of their property was built a year ago and is occupied by the Saranac Lake News Company. Some distance beyond is the firm of Wood Brothers, painting contractors, and still further beyond the railroad tracks are a number of business firms and restaurant grill businesses.

Property on Bloomingdale Avenue purchased in 1905 for $63 a foot was sold in 1912 for $150 a foot or an increase of 138 percent in seven years. The land (18 ft. frontage) in the transaction was adjoining the Leis building (now Vuzzi & Stephen) and was sold to J. C. Morgan of the Hotel St. Regis whose property was adjacent to the Leis property. One reason given for the big value increase was the street improvements involving paving, sewers and sidewalks. 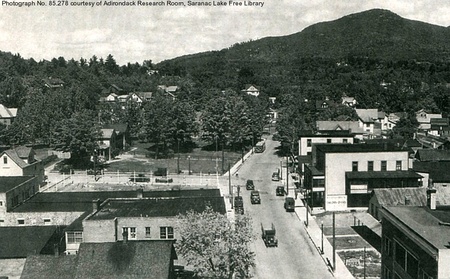 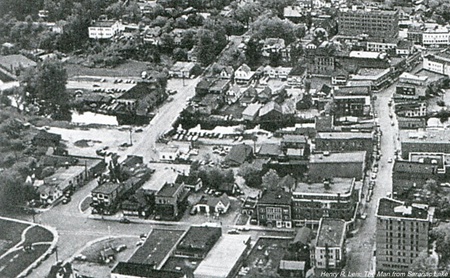 Bloomingdale Avenue runs along the bottom of this photograph that shows the western end of Bloomingdale Avenue with its cluster of three hotels at its intersection with Broadway at right. Clockwise from the eight-story Alpine Hotel at lower right is the Potter Block (previously the Arlington Hotel) and the five-story St. Regis Hotel. Only the Grand Union Hotel is missing as a result of a 1926 fire, it's lot standing vacant at lower left just across from William Morris Park. The Church Street Extension angles up from lower left. (undated) Adirondack Daily Enterprise, October 28, 1975

Another historic hotel that claimed the bulk of transients traveling by New York Central and the Delaware and Hudson was the strategically located Grand Union Hotel at the corner of Depot Street and Bloomingdale Avenue.

Most hotels that catered to salesmen had spacious sample rooms where the "drummer" could display his wares and the shopkeepers could browse and question the sales people about trends and upcoming styles.

The Grand Union Hotel burned in the year 1924. 1 There are old movies of its passing with the firemen sitting in rocking chairs while the hoses fought a losing battle with the ancient old hostelry.

The Grand Union fire left a lot of room on the corner, and the only logical use at the time seemed to be for car lots. J.J. Galloway utilized the area which was directly across from his Chevrolet agency where the K of C Hail is located today.

The Elks Club was then Taylor and Jackson's garage and Studebaker agency, and many high powered automobiles recovered in prohibition arrests were stored there briefly until disposition could be made of them by the government.

When miniature golf became the craze in the 1930's the corner became a popular recreation spot. The section of town where the railroad station stands was bounded by noise and happy confusion with two lumbermills, J.A. Latour, the Railway Express, and the Day Nursery all vying for a share of attention.

In competition in this section for automobile sales Buick, Chevrolet and Studebaker agencies fought it out with Glen Harvey's Willys Knight on Woodruff Street or Gray Bellows' Franklin on Upper Main. A few livery stables were making a last ditch stand but Harley Davidson and Indian cycles were causing more runaway horses than the incoming locomotives at the Union Station.

The block from the St. Regis corner east had everything: drug store, lunch cart, Itch Theatre, candy and stationery-store... MacAleer and Phelan's, Duprey Brothers Garage where high powered Minervas and other foreign cars were occasionally stored for the winter.

Just sitting in one of them gave you a feeling of great speed. The post office managed a brief tenure along this part of town and a hat shop for the ladies at Pasho's was present for several years.

The Leis Music store was a good place to buy a kazoo, harmonica, or sweet potato. Percy Mullen handled most of the grocery business on Bloomingdale Avenue.

The St. Regis had its own barber shop with Bob Maurer commanding four good tonsorial experts.

At night if you felt brave you had races on top of the arcade roof, a private cinder path 150 yards long and 15 feet wide. If the train happened to be moving along beside it, you could leap onto the sleeping cars and off to the roof again. A slip meant a lost leg or decapitation. Nobody thought much about that part.

The freight and baggage rooms were also an education with crated chickens, pickle barrels, and pathfinder bicycles all arriving on the same baggage cars. A runaway horse was also an exciting event in that section and happened once a week without fail.

Time ran out on the bustling Bloomingdale Avenue business section eventually and in the relocating of mercantile establishments much of the fun and interest of this street disappeared.