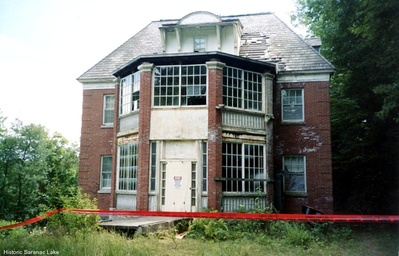 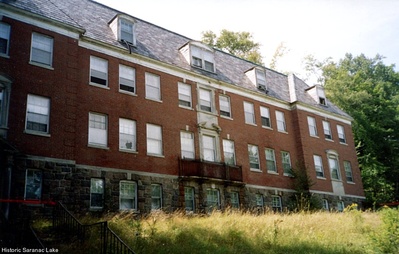 Year built: 1930; demolished in 2005 by the owner, American Management Association 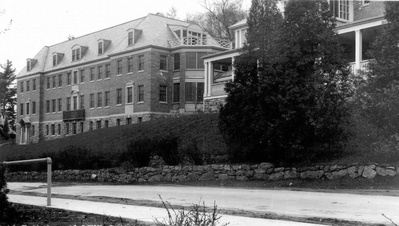 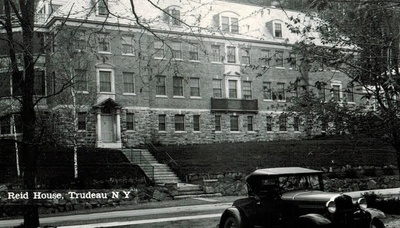 Undated. Courtesy of Noreen OslanderDescription: Reid Nurses Home was a large-scale institutional building designed in the Georgian Revival style. It served as housing for nurses who were not active patients. The building was built into the hillside so that it was two and one-half stories tall on the west elevation and three and one-half stories on the east. The red brick rectangular building was fifteen bays long and three bays wide. It sat on an exposed rough-cut rubble stone foundation and was surmounted by a slate shingled hipped roof broken by dormers. The broad horizontal expanse of the primary elevation was relieved by three-bay-wide projecting end pavilions, each of which featured a two-story semi-octagonal glassed-in porch with a wooden balustrade on the end or side elevation. Other details included red brick quoins, limestone trim and iron balconies detailed with Adamesque ovals. Windows were regular and symmetrical, characterized by double-hung six-over-six sash, except over the balconies, where there are sliding windows. The entrance is asymmetrically placed, marked by a shallow limestone pedimented porch with columns. Windows in the center of the facade were detailed with a limestone surround, a metal balustrade and a broken pediment. The dormer above this featured double windows.

History: Reid was designed by the same architect as the Ludington Infirmary and it is similar in style. However, with its relatively little porch space, this building makes no apparent effort to employ Ludington's cottage plan.

Dr. Trudeau wrote about the nursing school: An "activity undertaken by the institution in its development was to educate as special tuberculosis nurses some of the young women patients in whom the sanitarium treatment had arrested the disease, and thus fit them for an independent career of usefulness which does not especially endanger their health. In 1912 Mrs. Whitelaw Reid donated a substantial nurses' building [Mills, later torn down] to start a training school, as a memorial to her father, Mr. D. Ogden Mills, and two classes have already been graduated from this school as special tuberculosis nurses. . . . These nurses readily find employment in Saranac Lake, or take up institutional work elsewhere." 1

Dr. Norman Bethune was the anatomy instructor in 1927, while a patient himself. 2

Mrs. Reid's "last gifts for the nursing service were the attractive new fireproof Reid House, given also in memory of her father, and a bequest of $20,000 in her will." 3

Whitelaw Reid (1837-1912) was a journalist and diplomat. The Reids and Trudeaus were family friends; both leased their camps on the St. Regis lakes on the same day, July 15, 1886. 4 In World War I, Mrs. Reid headed the London chapter of the American Red Cross, and, no doubt drawing on her Adirondack experiences, sent American nurses down-filled sleeping bags.

Some blueprints for this building dated 4/29/1929 are in the collection of Historic Saranac Lake. The building was torn down in about 2005.