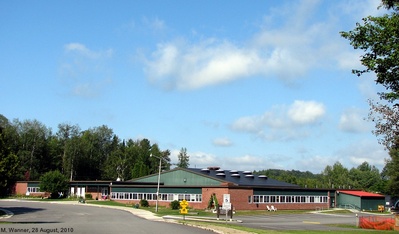 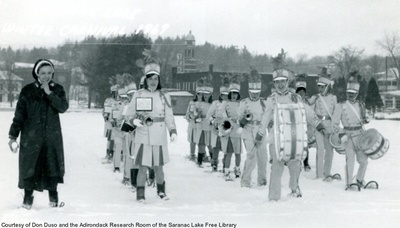 St. Pius X Snowshoe Marching Band, 1967 Winter Carnival.St. Pius X was Saranac Lake's parochial high school, designed by Sargeant, Webster, Crenshaw and Folley, one of the largest architectural firms in the Northeast. St. Pius X High School opened its doors to students in the fall of 1959. Dedication of the school took place on October 18, 1959 with Bishop James Navagh and Monsignor V. Noel Zimmerman leading the ceremony. The first principal was Sr. Mary Constance and other principals included Sr. Mary Bernadine, Sr. Mary Julia, and Sr. Kathleen Marie. The first senior class graduated in June 1962. In 1962 the first Valedictorian of the school was Jeanne Miner and the first Salutatorian was Tom Harrigan. St. Pius also has a tradition of an annual Father Daughter dance that began in November 1963. The school also had a Father of the Year award and winners included Alvin Skeels, Joseph Drutz, Daniel Kaestle, Gerard Wegman, Andrew Fortune, Joseph Martin, Lyman Lawrence. A new wing to the school opened in 1963.  The new wing was dedicated on September 9, 1963 and the celebrant was Bishop Leo R. Smith from the Diocese of Ogdensburg.  In 1963 the faculty consisted of twelve Sisters of Mercy, three Priests, and five lay teachers.

In May 1967 the annual dance became known as the Father Daughter and Mother Son dance. A Mother of the Year award began in 1967 and winners included Mildred Kunath, Virginia Mason, and Margaret Wolfe. In 1967 the Snowshoe Marching Band made their first appearance directed by Sr. Thaddeus.

Academics in the classroom prepared many students for future endeavors as they entered adulthood. St. Pius had well respected Debate Teams and Forensic Speaking Teams in the 1960's and they entered many competitions throughout the North Country. Athletics was a source of pride for the school as students participated in sports such as football, basketball, skiing, baseball, track, and lacrosse. Sporting event highlights include Tim Smart scoring over 1,000 points in his four year basketball career, and Tim also set a Catholic League record scoring 51 points in a game against St. Mary's of Champlain. In March 1966 the basketball team, with Tom Clark scoring 35 points, won the Catholic League championship in a narrow 72-71 victory over Holy Ghost Academy from Tupper Lake. In October 1960 St. Pius X earned their first ever football victory by a score of 12-0 over Beekmantown. In November 1961 the gymnasium was used for basketball games for the first time.

St. Pius recorded their first ever football victory on October 8, 1960 with a 12-0 victory over Beekmantown.  Dick Clark scored both touchdowns and these were the first touchdowns in school history.  1960 was the first season of football at St. Pius and the head coach was Ed White and he was assisted by Ken Wilson.  Home games were played on the field at Saranac Lake High School. In the fall of 1963 the new field behind the school was first used for home football games. The Golden Knights of St. Pius played their last football game on Friday night November 6, 1970 and ending up losing the contest by a score of 44-8 to Holy Family of Massena.  Bill Bola scored the last touchdown in school history and he also added the two point conversion.  Seniors who played their last high school football game were Chuck Lavery, Mike McKillip, Don George, Tom Oddy, Tom Reddinger, Dave Fregoe, Larry Barry, Ray Walton, and Bill Bola.

The convent for the Sisters was located at 29 Church Street and the Sisters were transported to and from the convent to the school on Petrova Avenue by Helen Riley in her "red bus".  The annual yearbook was called the Crusader and the nickname for the sports teams was Golden Knights.

Tom Clark says that the school was 7th - 12th grade, with 200-300 students. He graduated from St. Pius in 1966. His graduating class was about 36 students. They scrimmaged Saranac Lake High School twice in basketball and beat them both times. Twice while Tom was playing baseball, Saranac Lake beat St. Pius at baseball by one run each time.

Attendance declined, and the last class to graduate was in June 1971, after which the school closed. It was then leased by North Country Community College. It is now [in 2010] and has been for many years, North Star Industries, a sheltered workshop, with the Hhott House, a greenhouse, which sells plant materials to the public.

What led to the decline in the number of students?  Was it the cost of tuition, was it the treatment of the students by the faculty and coaches, or were there other factors?

Check out a picture of the 1962 St. Pius X track team on bunksplace.com and look under the caption The Way We Were