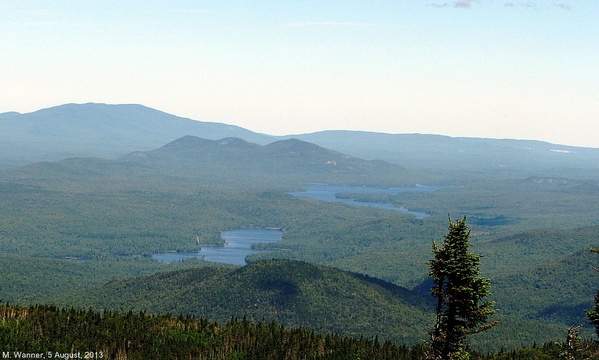 Franklin Falls Pond, left, and Union Falls Pond, right, from the summit of McKenzie Mountain. Union Falls is the name of a hydro-electric dam on the Saranac River built by Paul Smith in the town of Black Brook, as part of the Paul Smiths Electric Company. Completed in 1907, it is five miles downstream of Franklin Falls. It is also the name of the 1670-acre pond, sometimes called Union Falls Flow, and of a community. The pond has long been noted for its fishing.

Though a considerable proportion of the early settlers in Franklin were of the Roman Catholic faith, these were dependent for nearly a quarter of a century for enjoyment of the services of their own church upon Keeseville and the mission at Redford, which involved several miles of travel. Nevertheless interest so grew that at length a mission was established at Union Falls, and not long afterward, in 1854, Father James Keveney built a church at the place now known as Catholic Corners, which lies between Alder Brook and Union Falls. It was blessed under the name St. Rosa's of Lima, and has since been maintained. Incorporation was not effected, however, until fifty years later, with the bishop, the vicar general, the rector (Rev. Father Richard O'Donnell), Edward McKillip and Peter A. Tracy as trustees. Father O'Donnell is still the rector, and the church has nearly four hundred members.

May 31—The road between Silver Lake and Union Falls is being repaired by a force of men, Mr. D. Douglass foreman.

SOME FISHING TRIP AT UNION FALLS

There aren't many persons who know where Union Falls is; perhaps that best explains the excellent fishing there…

Union Falls is so small that it probably will not be mentioned on the map.

It consists of a big power dam of the Paul Smiths Electric Company, the pretty white painted residence of J.B. Hough—pronounced Huff—and family, the caretaker of the dam, an attractive summer home of Phelps Smith, one of the owners of the famous Paul Smith's Hotel Company, two barns and an assorted collection of fine rowboats.

Before the dam was built there the Saranac River used to run past without stopping, but the dam detains it a while and the result is a "flow" of about seven miles and a mile or so wide in the widest part. The place is filled with stumps and the trees which were killed by the water. Under these stumps live one of the biggest colonies of great northern pike now in the United States.

There are several reasons why the fishing is good at Union Falls. There is a big expanse of water; there are only five rowboats, and not many know about the place except the residents of the country, who are natural conservationists. If everybody was like them there would be no use for the game protectors or the Conservation Commission, because when they get enough they quit. I had always been used to fishing all day. It never occurred to me not to, but when we came in to breakfast that morning Dr. Kenyon said to me: "You've got all that you can carry now. That's enough. Let's quit."

. . . "The work started the last week of August with a target completion date of Sept. 16, weather permitting," said a spokeswoman for Kruger Inc., a Canadian company that owns the power-producing dam. . . .