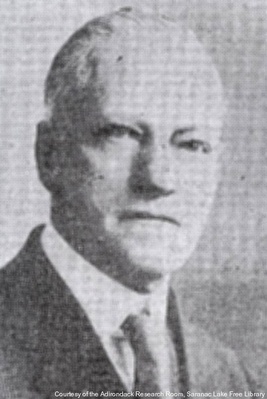 Walter Sagendorf was a business man who owned the Berkeley Hotel until 1940. He owned 48-50 Main Street from 1922 to 1931. He was a director of the Saranac Lake National Bank and Trust company. He was a member of the T.B. Society. In 1928 he provided Saranac Lake chamber of commerce with office space rent-free. Mr. Sagendorf was also the President of Howe's Caverns and builder of most of the houses on Fawn Street.

From an undated, unidentified news clipping:

Walter Sagendorf, one of Saranac Lake's well known and most esteemed businessmen, died suddenly at 10 o'clock last evening at his home in the Berkeley apartments on Main street. Although he had been in delicate health, following a stroke several years ago, his condition was not considered as serious until a few hours before his death, which was ascribed by his physician to a heart attack.

Born July 28, 1872 at Sagendorf's corners, near Howes Cave, he was the son of the late Harmon and Rachael Baumes Sagendorf. His boyhood was spent in that vicinity and he attended the schools in Cobleskill. For a time he taught in the Cobleskill schools and later engaged in the grocery business there.

He married Miss Jennie L. Nethaway of East Cobleskill in 1903 and a year later the couple came to Saranac Lake to make their home.

Mr. Sagendorf began his business career here when he opened a boarding house for patients in this village. He later operated a restaurant and finally purchased and operated the Berkeley hotel, which in recent years was converted into the Berkeley apartments.

He also engaged in the real estate business and became the owner of several valuable properties here.

Among his activities Mr. Sagendorf was for a number of years vice president of the Saranac Lake National bank, which was consolidated last year with the Adirondack National bank. He was president of the former Chamber of Commerce of this village and served the village as trustee. Many other civic organizations received the, support of Mr. Sagendorf."

Although, because of ill health, Mr. Sagendorf had been obliged to curtail many outside activities, he was still able to attend to his business interests and was still president of the Howe Caverns association, which he had helped to organize. He was also a member of the Saranac Lake Rotary club, and regularly attended its meetings, and an active member of the Presbyterian church here.

Residents of this village frequently spoke this morning of the loss which this community has sustained in the death of Mr. Sagendorf.

The immediate surviving relatives are his wife and one sister, Miss Celeste May Sagendorf, the latter of Howes' Cave. There are also four nephews, Walter, Allen, Victor and Willard Sagendorf of Howes Cave, a niece, Mrs. Willard Hoyt of Castleton and an aunt, Mrs. Elizabeth Richtmyer of this village.

Funeral services for Mr. Sagendorf will be held at 10 o'clock Thursday morning from the Presbyterian church here. The Rev. Alvin B. Gurley, pastor of the church, will conduct the services and the body will be taken to Cobleskill for burial from the funeral home there on Thursday afternoon. The body will lie at rest at the funeral chapel of A. Fortune and company at 65 Broadway until the time of the funeral.

The Berkeley hotel has been purchased by Walter Sagendorf, who has made numerous improvements to the property.