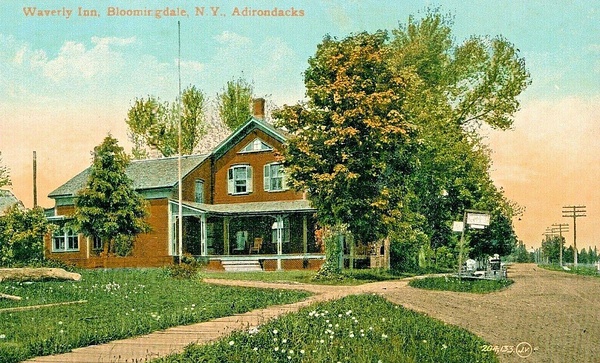 Mr. and Mrs. F. C. Toof, who have conducted the Garondah Cottage at Rainbow, N. Y., for some years have rented the Waverly Inn at Bloomingdale for the winter and will be pleased to entertain their friends or the traveling public coming that way. They will return to Rainbow in the spring and have their cottage open for the early fishing.

We understand that the Waverly Inn of Bloomingdale has changed management. It has lately been purchased by Louis Pelkey, who has been in the employ of Paul Smith's Hotel for fourteen years. Mr. Pelkey has improved the place, adding a bath room, closets and wash room, with hot and cold water, and his barns are in the best of repair for transient trade.

Louis Pelkey, a resident of Bloomingdale for the past 30 years passed away at his home at Waverly Inn on Thursday morning after an illness of about two years, at the age of seventy-six years.

He was born near Ausable Forks and spent his entire life in the Adirondacks. For many years he was proprietor of Waverly Inn well known to tourists and sportsmen, who visited this region...

...Nice to see Mrs. Bob Dumovitz and her son Doulin who are spending some time here and busy with renovations to their house. The house is best known to most as the Louis Pelky place, and in the early 1900's it was the Waverly Inn Annex.