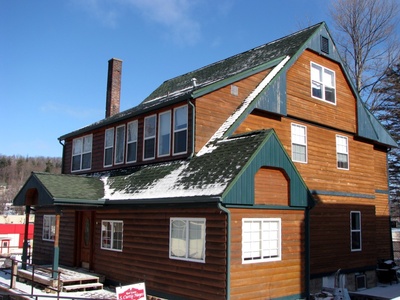 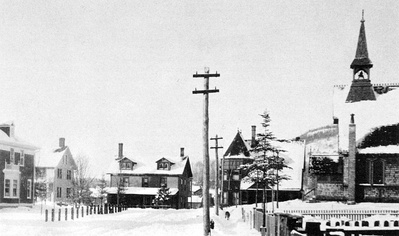 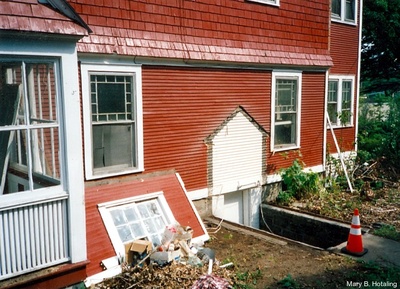 The Werle Town House before it was remodeled; the connector to the Werle Cottage has just been removed (c. 1990s). This is the same side of the building shown in the photograph at right.

Old Address: 2 Church Street, originally 110 Main Street, before it was moved down the hill on the new Church Street Extension.

The land on which the cottages stood belonged to farmer George Washer and his wife Emily Washer, as early as 1875. In 1890, the cottage was built by Emma B. Hague, wife of Pelham Hague of Pittsfield, Massachussetts.

In September, 1900, the house was sold to Jane Conklin, who became an early, successful sanatorium proprietor.

In August, 1923, the property was acquired by two women who had become friends while curing at the Meagher Cottage, Aletta Werle, known as "Miss Werle" and Jane Schneiderwind, known as "Miss Jane". Two years later, they leased 110 Main Street, buying it outright in May, 1929. Although Jane Schneidwind was the business manager of the operation, the two cottages were advertised as "The Werle Cottages."

In 1931, the house was moved partway down the hill and turned 90 degrees to allow for the extension of Church Street directly through the location where the house had stood. The house has been extensively modified from its original design, some of the work almost certainly coinciding with the move.

2013-04-15 15:59:47   There is an error above "In September, 1990, the house was sold to Jane Conklin, who became an early, successful sanatorium proprietor." Mrs. Conklin is my great-grandmother and she died around 1935. It is possible that the correct date is 1890, but I don't know that for certain. If anyone in town has information on Mrs Jane Hoag Conklin or her husband, John Conklin, I am trying to determine their "roots." —janemagrady