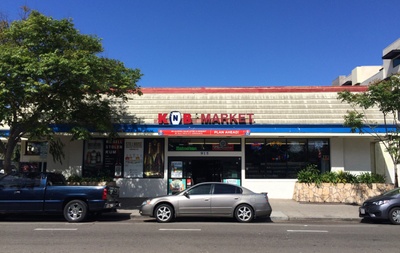 Keg N Bottle is a liquor store in IV, part of a chain of liquor stores in the Southern California area. This one is moderately distinct in IV for the wall of liquor displayed in the front window and the shelves of liquor up to the ceiling.

Keg N Bottle has done renovation to be more energy efficient: "...in January of 2009 invested approximately $40,000 in energy efficient technology for their liquor store. The upgrades, which primarily focused on more efficient lighting systems and upgrades to refrigeration appliances, saved Keg N Bottle $4,800 on their first energy bill."

A profile of the store in The Independent in 2010 provides a customer's perspective and details from the manager, Samer. It includes: "One recent day, during my visit number one of the day, Samer showed me a cardboard box full of fake ID’s. Over 400 ID’s were confiscated last year alone." 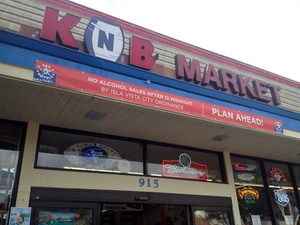 Where does that midnight rule come from then? According to a UCPD officer in 2003, it seems to be from a state agency: "The Department of Alcoholic Beverage Control is the agency responsible for the issuing and controlling of the alcohol licenses. A standard was reached years ago that alcohol sales in Isla Vista would stop at 12 a.m., unlike everywhere else in which the time was set at 2 a.m." 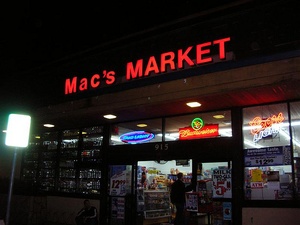 This store used to be Mac's Market, also a liquor store. Mac's Market closed after alcohol violations in 2004, which required it to sell its liquor license to a new owner. The Santa Barbara County Sheriff's Department had gotten extra funding from the state that year to crack down on underage drinking in IV. SOS Liquor had to close for a month that year due to its own violations. 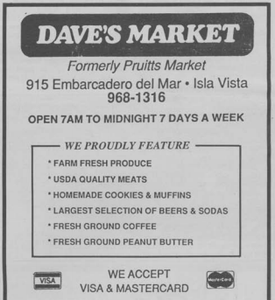 From the Isla Vista Free Press, September 1987Before it was Mac's Market, it was Dave's Market, Village Market, and Pruitt's Market. From a newsgroup thread 10 years ago, talking about probably the 1970s or 80s: "There were two markets, Isla Vista market and Pruitt's. IV market looked like some army base market, and Pruitt's was all hippied out with wood and shells, but IV Market was just as hip."

The former owner of Dave's Market was the manager of the Isla Vista Food Coop for a while.

In about 1970, Village Market on this spot looked like this. There's also a sign above it saying Wooden Horse Restaurant. 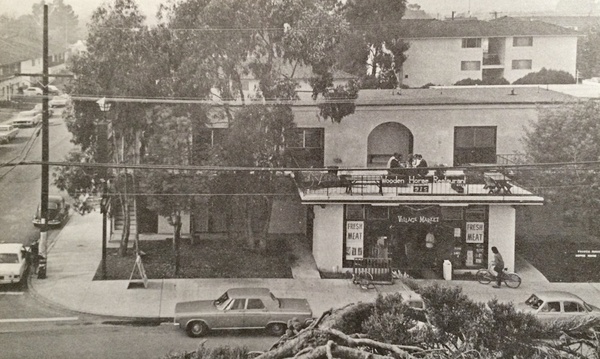 From Isla Vista U.S.A. by Ray Varley, a self-published book that was available for sale for $5 from the IV Bookstore and is now $250 from used book dealers on Amazon. Varley was a UCSB vice chancellor.