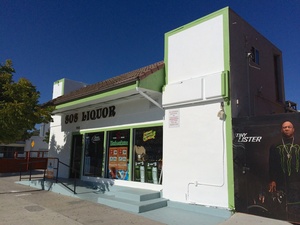 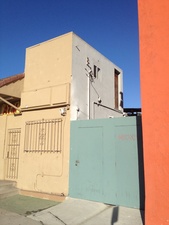 SOS Liquor is a liquor store at 956 Embarcadero Del Norte, originally called Sip Our Suds Beer. It opened in late 1973 or early 1974 as the first store in IV to sell alcohol (previously there was a statute prohibiting the sale of alcohol near UC campuses). The second story of the building has a mysterious door covered in plywood. 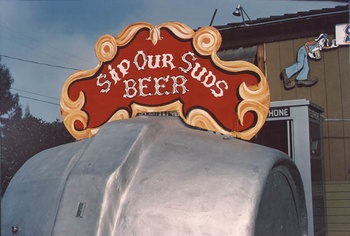 Sign in 1978, by Marion Post WolcottFrom a newsgroup thread in 2004: "My last year in I.V. an "off campus" beer seller arrived...prior to around 1973 there had been some legal restriction on beer or wine sales within X miles of a UC campus. This place started just around from my last apartment, on Sabado Tarde. It was called "SOS" or somesuch, and had funky waterfalls and suchlike in the rock garden outside. And it has lasted...everytime I drive through I see it."

From Profile of Downtown Isla Vista by Michel Nellis (1990), pages 73-74, about business in IV after the 1970 riots and how the original owner of SOS Liquor pioneered alcohol sales in IV:

"...But what they really wanted was beer. Their responses to two surveys following the riots made this point very clear. However, the sale of wine, beer, and hard liquor was illegal in Isla Vista under section 172 of the California State Penal Code. This statute prohibited the sale of alcoholic beverages within a one mile radius of any University of California campus (UCLA and Berkeley were the exceptions). Residents of Isla Vista had to travel to Goleta to buy their liquor."

"Back in 1970, Harry E. (Mike) Schaeffer began a battle that took his cause all the way to the state Supreme Court. He began by posting a "Notice of Intention to Engage in the Sale of Alcoholic Beverages" on his restaurant, the Yellow Submarine. Although the Isla Vista Community Council unanimously endorsed the beer license, the Alcoholic Beverages Control (ABC) turned down the application on August 10, 1970. The ABC reasoned that it was unwise for liquor to be sold in an area that had just seen several months of violence. Santa Barbara County Sheriff James W. Webster agreed. However, when John Carpenter became sheriff a few months later, he withdrew the objections of the sheriff's department."

"The ABC Appeals Board reversed the original decision, but the ABC successfully appealed to the Supreme Court on July 10, 1972, so that liquor could not be sold in Isla Vista. Then a year later, Schaeffer resubmitted his application to the beverage control board, and on December 17, 1973, his application was accepted. However, the ABC added two conditions for selling liquor in the area. Nothing with an alcohol content over 3.7% could be sold, and no liquor could be sold after midnight. The first condition canceled all wine and hard liquor sales, allowing only the sale of beer. Following the ABC approval, Schaeffer opened S.O.S. (Sip Our Suds) Beer next to his Yellow Submarine restaurant. Shortly thereafter, the Six-Pak Shop opened on the other side of the loop. Several nearby restaurants also applied successfully for beer licenses. By 1979, the original conditions had been dropped and both liquor stores began stocking wine and hard liquor along with beer."

SOS Liquor was owned for a time by Bob Lovgren, who was active in local politics. From Chapter 4 of Isla Vista: A Citizen's History: "...in 1983, the IVCC was successful in lobbying the County to add painted bike lanes in the downtown area, over the heavy opposition of the owners of the Isla Vista Market (Verne Johnson) and the S.O.S. Liquor Store (Bob Lovgren), who complained about the loss of on-street parking spaces in front of their businesses."

SOS Liquor was also owned for a time by Jin Mook Hong, who died of a heart attack in February 2004.

In May 2004, SOS Liquor was closed by state authorities for a month due to alcohol violations, including selling alcohol to minors. (The Santa Barbara County Sheriff's Department had gotten extra funding from the state that year to crack down on underage drinking in IV; Keg N Bottle had to change ownership due to its own violations.)

The building was white for a long time (a photo of it in 2005, when it was white). Then it got painted beige. In 2015 it was renovated to have more windows in front, and it was repainted to white. 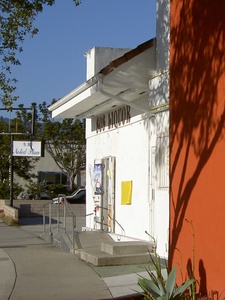 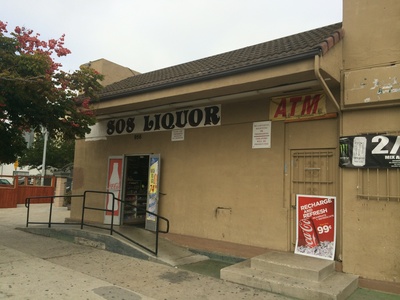