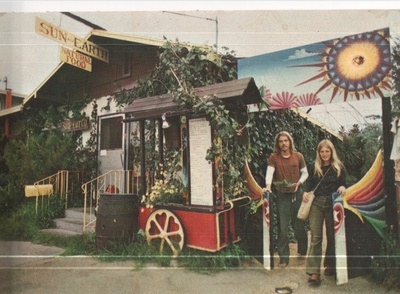 Undated postcard fromthis post (and this one as well), showing the geodesic dome structure over the back garden area.

Stories and photos from a former co-owner From Bob McDonald, former owner of Sun and Earth Natural Foods Garden Restaurant with Ric Smith from 1974 to 1979:

Richard Moore established Sun and Earth in 1968 as a natural foods store featuring bulk foods, organic items and various alternative products appearing on the market in the late 1960’s. It featured a take out food window where one could eat veggie tacos and steamed rice and vegetables in a peaceful garden setting under an open air geodesic dome. Feed the People was his vision and it was all very hippie in keeping with IV’s persona at the time.

Ric Smith was an East Coast surfer who came to IV in search of waves and sun and worked as a cook at Sun and Earth while attending SBCC culinary arts program. Ric and I met in IV while I was attending UCSB, and I also worked as a cook at Sun and Earth. As the hippie counterculture in IV waned and was replaced by the emerging surf and sun culture of the 70’s, and with the entry of the well-funded Sunburst Foods into the IV scene, Richard Moore decided it was time to sell the business. Ric and I begged, borrowed and scraped up what funds we could to purchase and remodel the business. We closed the retail food operation and reimagined the store as a sit-down eatery, and with the support of numerous friends who contributed money and sweat labor in exchange for food and promises, we re-opened Sun and Earth Natural Foods Garden Restaurant in Fall 1974. We retained many of the original vegetarian menu items and added fresh fish and creative salads, casseroles and ethnic dishes. Our vision was for a comfortable dining environment in IV where people of all types – surfers, hippies, students, faculty and even parents – could experience healthy eating using fresh, natural and minimally processed ingredients as an alternative to fast food. For many it was their first exposure to such dining, and they incorporated it into their lifestyles as “health food” became more mainstream. Sun and Earth was one of the first such restaurants in the area and many would follow in its footprints. It was innovative in sourcing produce from local growers (farm to table as it is now called), featuring a salad menu and ethnic fusion as well as such things as flame broiling fish instead of deep frying. Also of note is that Ric and I had one of the first on sale beer and wine licenses in IV at Sun and Earth, as no alcohol could be sold within a mile radius of UCSB pre 1974. Before al fresco dining was the rage, garden dining at Sun and Earth was par for the course, and many people over the years have recounted fond memories of a Saturday night date in the lush garden with the central fire pit blazing and eating dinner with a glass of wine or a post-surf feast and a cold beer.

Gone but not forgotten.

Some pictures from the mid 70's: 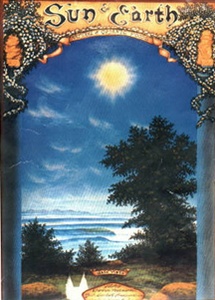 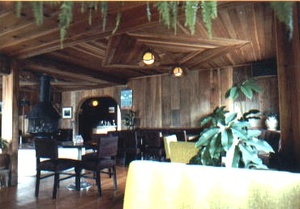 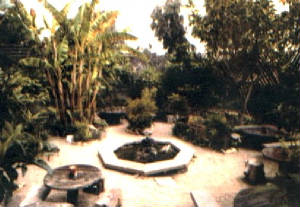 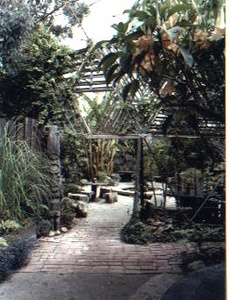 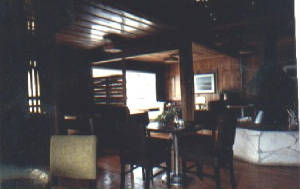 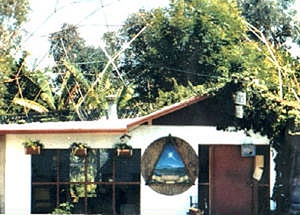 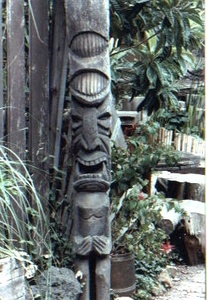 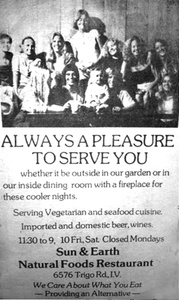 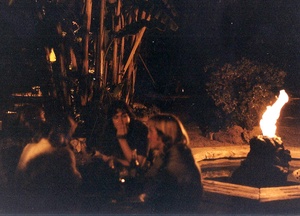 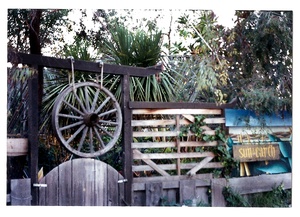 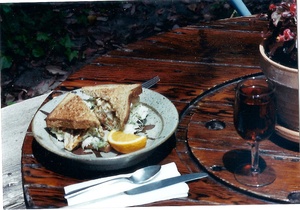 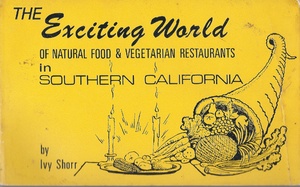 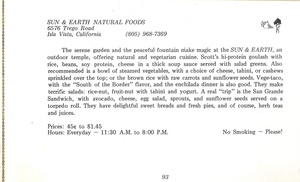 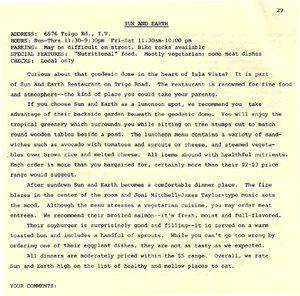 Quotes from other sources 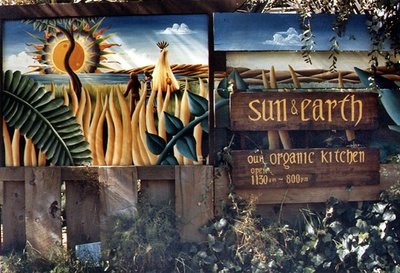 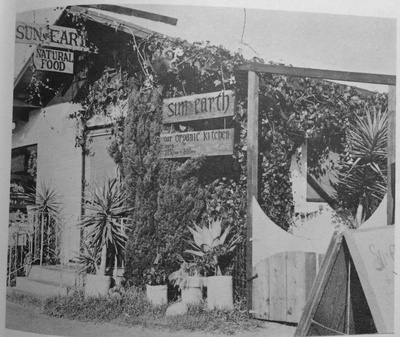 In approximately early 1970, from Isla Vista U.S.A. by Ray Varley.A comment about favorite closed restaurants says "How about Sun and Earth natural foods restaurant in Isla Vista in the late 60′s to mid 70′s? For forty cents, you could get a plate of veggies and brown rice! Perfect place for impoverished students. They had an enclosed patio to sit on the floor and eat off of paper plates."

From artist Mary Heebner writing about her time at the College of Creative Studies: "In the afternoons I took a swim in the ocean, showered on campus, then either went to class, hitchhiked into Santa Barbara to my waitress job or walked back to Isla Vista to sell tofu and carrot juice to surfers and hippies at my job at Sun and Earth Natural Foods."

It's mentioned in a biography of Edie Sedgwick, who spent some time in IV in the late 60s: "She was always doing just what she wanted. We'd walk into the Sun and Earth together, over to the juice counter, and she'd ask "I wonder what this tastes like?" She'd open up a bottle and take a drink--"Eeeech!"--put it back, and walk out."

From "The Underground Guide to the College of Your Choice" (1971): "Local hangs include "Borsodi's Coffee House," the "Taco Bell" (where to score) and the "Sun and Earth" (where the freaks hang)."

Another comment says "While IV is rather different from the time I lived there in the late 1970s, even back then it was “a space both of aggressive enjoyment and chronic abandonment,” although I recall the furniture out in the streets, not so much in the ocean, and much of it salvaged by Hmong immigrants from Laos and Vietnam, as well as some of us poorer folks (I worked as a dishwasher, first at Sun and Earth, a little surfer-owned restaurant, and then at the Friendship Manor retirement home)."

The UCSB and Isla Vista Walking Tour says "This was for many years the `Sun and Earth’ vegetarian restaurant, and had a geodesic dome in the back. The restaurant was portrayed in the Ross MacDonald mystery `The Blue Hammer’. MacDonald was a famed Santa Barbara mystery writer, whose first mystery novel was made into the movie `Harper’ starring Paul Newman in 1966."

This person says "the back garden of The Sun and Earth restaurant was the first experience many of us suburban kids had of "health food.""

From "Problems of Industrial Society": "...the Sun and Earth, became a community focus where sandwiches could be consumed in a garden of nasturtiums."

In a Facebook group, a comment from January 2015: "Thanks to my friends Lisa Lindquist (former S&E waitress) and Dave Torrey, I was invited to the Sun & Earth 40th(?) Reunion last summer. I met the two owners, Bob McDonald and Ric Smith (the original owners were Richard Moore and John McIllveny) lots of employees and friends and families. It was an excellent afternoon with great stories of the restaurant, surfing, pot and how to handle the situation when someone's parents came in for a meal. I brought the same postcard Dave posted to see if anyone could identify the two people in the photo. The guy was possibly a dishwasher named Wayne but "Wingnut" was the name most recalled and the girl was known as "Bamboo"."

From "Profile of Downtown Isla Vista" by Michel Nellis (1990), a Masters in Public Historical Studies thesis available in the UCSB Library:

Pages 16-17: "Sun and Earth Natural Foods represented another departure from the traditional. Richard Moore opened his garden restaurant on Trigo Road in 1968 with a definite purpose in mind. He believed that a calm and alert mind came only from a healthy body. Thus, Sun and Earth prepared only foods that were grown in natural soils with no growth stimulants, chemicals, or toxic sprays. At one time, Moore also offered six week training courses in natural food preparation; and for a brief period of time, the business prepared natural foods for large community groups. Moore even attempted to obtain a contract to do the same in some of the off-campus residences. He hoped that by installing natural food kitchens, new jobs would be created in the Isla Vista community."

Pages 69-71: "Natural food restaurants and foodstores also signalled a return of sorts to the "good old days" -- that is, before fancy packaging and preservatives. Some had their ties to religion, others did not. All were vegetarian. One was Richard Moore's Sun and Earth restaurant which served only organically grown food and no meat...Challenging both the traditional markets and the community-owned food coop was the Sunburst Market which came to Isla Vista in 1975. It was owned by the Brotherhood of the Sun, a religious-business commune which started in the Santa Barbara area in 1970, and by 1975, numbered two hundred members...it was accused of backing out of an agreement made earlier in the fall of 1964 to purchase the Sun and Earth restaurant...Moore finally sold his restaurant to Richard Smith, a local Isla Vista resident."

Pages 96-97: "Other than the IV Fud Coop, the most successful health food venture had been the Sun and Earth restaurant started in 1968 by Richard Moore, who began his business because of his desire to serve healthy food in a healthy environment. In the mid-1970s his sold his restaurant to Richard Smith who continued to run it successfully until he sold it to another Richard, Richard Weiss, in 1980. Weiss also bought the property where the restaurant was located at the same time. Weiss ran into troubles early on and soon changed the nature of the business from a health food spot to the latest craze, a hot tub and sauna facility, and dubbed it Shibuki Gardens. Weiss totally renovated the property, fitting in private spas, soft lighting, and lush plantings, to create a soothing environment. His efforts brought him recognition when Shibuki won Isla Vista's first Goleta Beautiful award in 1983. Weiss attempted to sell the property and the business in 1984 and 1985 before successfully completing the transaction in 1987. The new owner now runs a tanning salon on the property -- the latest trend in looking and feeling good."

What the building has been since then

From 1981 to about 1987, it was the Shibuki Gardens Spa & Sauna, with a new facade. It had a mural of ocean waves painted by Samizu Matsuki. 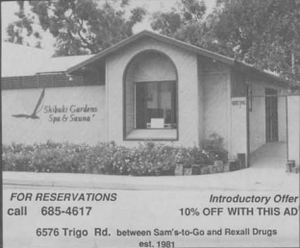 From the Isla Vista Free Press in February 1987.

It was the Vista Cafe in 1994, with coffee, pastries, and sandwiches. 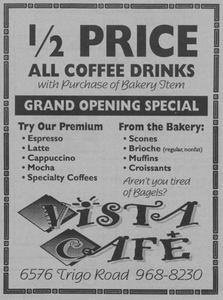 Then it was Cafe Nirvana (an Indian restaurant) for a while.

The building has been empty since at least 2005. In January 2010 David Singh announced that he'd soon open Good Earth Pizza in this location. An article from that time said "They are in final stages of getting a building permit to give the building a more contemporary look." In 2017, Singh was still planning to open the pizza restaurant. 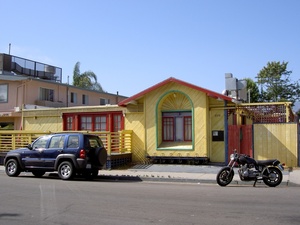 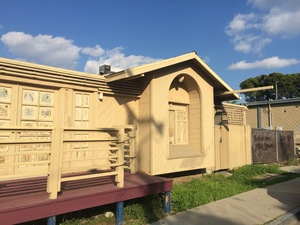 The Sun and Earth was a gathering place in IV's "bohemian" days, as people describe them, and it's featured in a bunch of people's memories. IV was strongly a hippie place for a while, and slowly that declined as US youth culture shifted - one person remembers this as coinciding with political shifts around when Reagan came to office. People in IV started dressing differently and having different kinds of parties. Some remnants of the 70s still exist (such as the IV Food Coop), so it's not quite forgotten, but it's interesting to learn how significant and different it was from today.