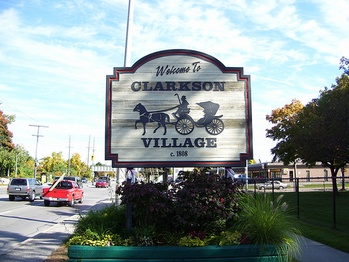 In 1808, Warren Clarkson and his brother Joshua left their home in Albany, New York, bought farmland near Lake Ontario, and opened the first store in what would be known as Clarkson.

A post office was opened in the family store and William Clarkson, Warren's son, became the postmaster. Clarkson community never grew very large. It had a few houses and shops along Clarkson Road, a railway station, a school, and a church. Less than one hundred people lived in this quiet community. In 1856, Captain Edward Sutherland (1794-1885) moved to Clarkson with his seven children. A widower, he purchased "Bush's Inn," a former inn and coach house that was the halfway point between Hamilton, Ontario and Toronto (this building, a private residence, still stands on Clarkson Road South). Here, he is said to have introduced both strawberry and raspberry cultivation to the area. Commercial fruit farming expanded in the area through the rest of the 19th and into the early 20th century. The Sutherlands later became connected by marriage to the Harrises of Benares (see "Sites of Interest" below).

The surrounding area consists of a mix of homes, some of the last major industrial sites in Mississauga outline the community, These include:

Unable to include Clarkson on the Web

There are no pages with the tag "Clarkson".
Edit tags
Cancel
Nearby LocalWiki regions: Toronto Guelph