There was a rally on Tuesday, October 1st to celebrate.

Kind of sucked.  Colon looked like someone else had gotten into his body in the first inning. He couldn't throw strikes, hit a batter, and basically let the Tigers have their way with him. The A's played shoddy defense even though they were only charged with one error and couldn't catch up to Scherzer's fast ball (which is really really fast and touched 97.) Cespedes hit a one out triple and sat on third.

On the other hand, the Coliseum was PACKED. The third deck was open (no tarps) for the first time in ??? years. Announced attendance: 48,401. The place was incredibly loud, rally towels waved, and somewhere, Lew Woolf was grimacing. Tomorrow is another day.

Game two was AMAZING. Sonny Grey, the 23 year old rookie, pitched one of the best games many A's fans have seen in their lives. Chants of "SONNY" filled the coliseum. Grey's battery mate, Stephen Vogt, a 26 year old rookie, had a walk off single in the 9th to win the game.

In game three, both teams remembered how to bat. The A's scored 6 runs, including homeruns from Seth Smith, Josh Reddick and Brandon Moss. Coco went 3 for 4 and a good time was had by many. The Tigers scored 3 runs, all in one inning, which means that in three games, the Tigers have scored in 2 total innings.

In the 9th, Victor Martinez took exception to Grant Balfour's rage and the benches cleared to add a little excitement to the otherwise all A's showing.

The A's lost game 4 in Detroit. It was a sad day and forced game 5 in Oakland.

The bullpen blew the game for the A's and Scherzer was brought in for relief for the Tigers- the A's nearly got him.

For game 5, the A's opted to go with Sonny Gray again, rather than the (very) established Bartolo Colon.

This is a map of bars that show A's games. 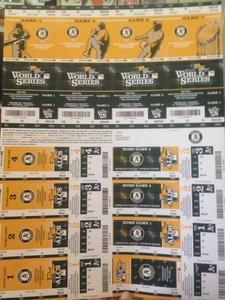