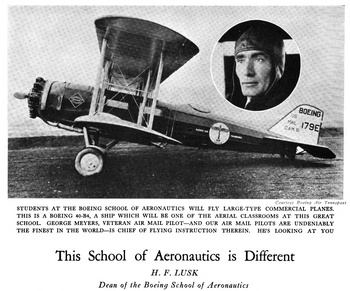 The Boeing School of Aeronautics was a flying, airplane design, and mechanic training school at the Oakland Airport, founded in September 1929. It was started by Boeing to compete with other flying schools like the Curtiss Flying School in San Diego. The school started with 16 staff and 100 students (or 14 staff and 125 students according to another source.) The Boeing Frontiers website says they planned on 25 students, but 100 applied, so they expanded to starting classes every 3 months instead of every year. 2 Theophilus Lee, Jr. was the school manager, and George Myers was the director of flying. 5 Hilton F. Lusk was the first dean, though he was only there a year. 3

Notable alumni of the school include Lee Ya-Ching, who was the first woman in China to receive a civil pilot's license; Frederick Howard Buller, who later designedDHC-2 Beaver float plane, widely used by bush pilots in Canada and the U.S.; Ed Yost, the "Father of the Modern Day Hot-Air Balloon"; and Lillian Moses, who may have been the first woman to receive a pilot's license from the school.

Flight students formed the "Flying Jackass Club" made up of students (and some instructors) "who commit 'one of those things' while acquiring their wings." 13 Likewise the master mechanics students created A "Fumblers' Club". 14

Hilton Frank Lusk grew up in Oakland and graduated from Oakland Tech. Before Boeing, he had been a professor at College of the Pacific (now University of the Pacific) where he had started a aeronautics program. He wasn't at the Boeing School long; in September 1930 he left to teach at Sacramento City College 7 and manage the Sacramento municipal airport.

School manager Theophilus Lee, Jr. had been a flying instructor during WWI, later became a Methodist pastor in San Francisco, then became a pilot for the mail service. 9 In 1942 he joined the U.S. Army Air Force as a major to teach. 11

Allen F. Bonnalie was the director of technical instruction c.1931-1938. He had been a pilot during WWI ad was awarded the Distinguished Service Cross, 10 and was later an exec with United Airlines.

John W. Thorp was a graduate of the school and later an instructor in engineering drawing and design. He designed the T-5 trainer used by the school, and numerous other aircraft over the years.

In addition to the above, different articles list various names over the years, 3,12 and a 1939 ad in Popular Aviation shows pictures and gives brief biographies of them. 15 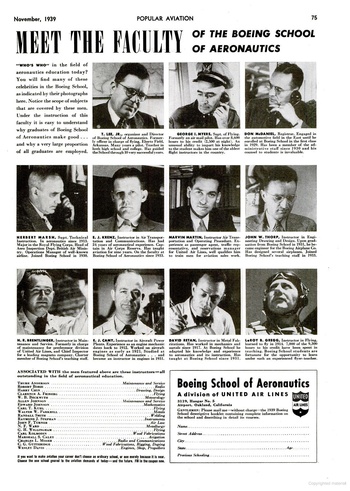 The school was initially housed in Hangar No. 5. 5 In 1940 as part of increased national defense preparations, the school built barracks and other new buildings to train enlisted soldiers as aircraft mechanics. 8 The school expanded to 14 buildings and 1,000 students at its peak in 1942.

Boeing absorbed the school functions into the parent company. In 1943, the school facilities became the United Air Lines Training Center which continued to train mechanics under a Navy contract until 1945, before closing. 1,2

See also a selection of ads for the school from the 1930s and 1940s from Popular Aviation magazine.

Today the Oakland Aviation Museum is housed in one of the former school buildings. Hangar No.5 still stands at 8517 Earhart Rd. 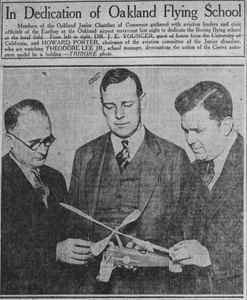 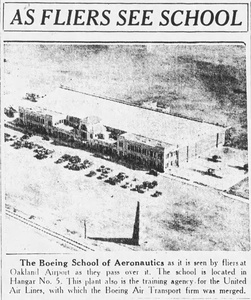 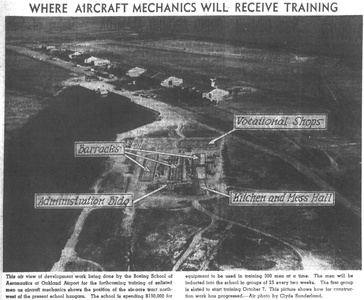 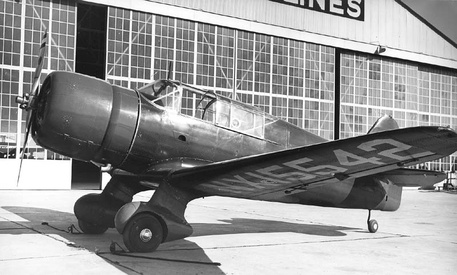 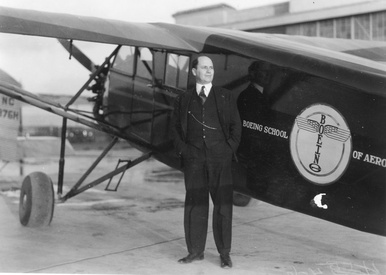