Castlemont High School opened in 1929 as East Oakland High School. The original school actually looked like a castle, but the school was later rebuilt and the “300” building is the only part which remains from the original school. Castlemont High was designed by Chester Miller and Carl Warneke, Oakland architects. These architects also designed the Hill Castle Apartments, the Malonga Casquelord Arts Center and the Main Library. 5 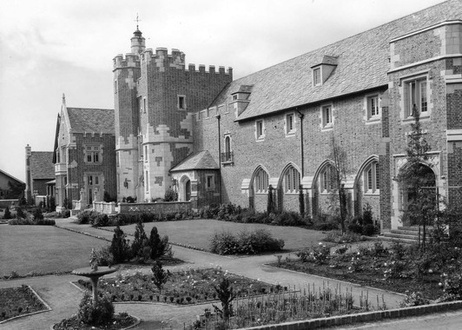 The original castle-like building opened in 1929. In 1956, it was declared to be not earthquake safe. After securing funds and getting bids, in June, 1959, 103 portable classrooms were moved onto the campus to be used during construction of new buildings. 6 The gymnasium and a classroom annex were saved, but the rest was demolished. The new buildings opened for students in the fall of 1961. 7

In celebration of Martin Luther King Jr. Day a group of approximately 70 Castlemont High School students were taken by their science teacher to a screening of Schindler's List on January 17, 1994. It was later reported that the teacher hoped the students would draw parallels between Dr. King's experiences and that of the Jews during the Holocaust. Unfortunately, there had been no preparation of the students, the majority of whom were African American and Latino. During the screen some of the students laughed at scenes of Nazi brutality. Their behavior upset many of the other theatergoers, many of whom were Holocaust survivors, which lead to the movie being stopped, the lights in the theater were turned up and all the students were ordered out of the theater, to the applause of the audience. A nationwide criticism ensued, with much debate amongst psychologist, counselors, historians and concentration camp survivors who came to the school to meet with the Castlemont students. Ultimately, the director of Schindler's List, Steven Spielberg came to Castlemont (along with Governor Pete Wilson) and spoke to the all the students during a school wide assembly. Gov. Wilson announced the formation of the Schindler's List Project which would teach high school students the history of the Holocaust along with screening of the movie.

"The students have their defenders. The manager of the movie theater said the laughter was no worse than the poor etiquette often exhibited by other patrons. And school officials said that it was not surprising that the students, who live in one of the poorest and most dangerous areas in Oakland, might be cavalier about a scene of brutality after having had to inure themselves to the violence they see every day." 4