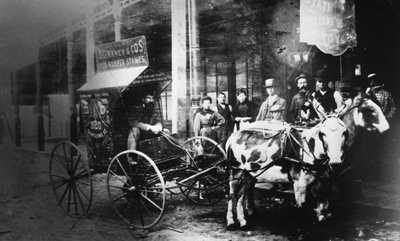 Klinkner family; Charles seated in wagon
photo from Oakland Museum of CaliforniaCharles Alexander Klinkner (June 25, 1852 – March 17, 1893) was a German immigrant who established the town of Klinknerville, in what is now the Golden Gate neighborhood of North Oakland, California. He was a real estate agent, as well as an insurance agent, and was considered a progressive and influential citizen. He was also a showman when it came to promoting real estate and other interests.

Born to John and Katherine Klinkner in Surbruechen on the Rhine, Klinkner was the second of fourteen children. The family immigrated to the United States when he was a child, and settled in the southeastern part of Iowa. Klinkner only attended school until the age of 11, after which he had to work. His father died in 1884.

Moving to California in 1872, Klinkner settled first in San Francisco, where he worked in the general merchandise and novelty store of Van Schaack & Co.

For a time he worked with a threshing-machine in the interior, then later was employed as a traveling salesman to a peddler whom he bought out for $142 after only six weeks of employment.

Within three months Klinkner had earned $960, and he then returned to San Francisco where he sold novelties. The next business he began was the sale of rubber stamps which turned out to be extremely profitable.

On November 3, 1875, Klinkner married Katherine Virginia Parke (September 1, 1885 – May 1, 1945), who was born in what was then the town of Clinton. Together Charles and Katherine had seven children: Charles Alexander, Jr., Frederick Schneider, Herman Parke, Harriet Katherine (Hattie), Cora Virginia, Harry Davey and Elma Irene.

In 1878 Klinkner moved from San Francisco to the suburban location between the prosperous cities of Oakland and Berkeley, where for $100 he purchased the large residential lot. Klinkner borrowed additional funds for the construction of 52 buildings, homes and businesses. He owned 2,000' directly on San Pablo Avenue, which at the time was one of the main roads connecting Oakland and Berkeley. (It still is!)

Klinkner’s Block, with a frontage of 120', was a two story building. The first floor was a Post Office, a drug store and a general dry goods store. Upstairs was the public hall, and 42 offices. Klinkner also built a large hotel in the town.

Klinkner was very generous in contributing to community. He donated money to local churches and educational institutions. Klinkner donated $500 and raised an additional $2,000 for the railroad company to extend the horse car line to Klinknerville from Emery Station.

The value of his property dramatically with the advent of the electric and cable roads between Oakland and Berkeley passing through the Klinknerville neighborhood.

Klinkner was a staunch Democrat who took an active interest in local politics. He also was a member of the Rising Star Lodge, No 152, Knights of Pythias, and was involved with the Harbor View Council, and the Chosen Friends.

In addition to his businesses in Oakland, Klinkner also owned a large and lucrative business with many employees at 320 Sansome Street, San Francisco, manufacturing rubber and metallic stamps and badges. 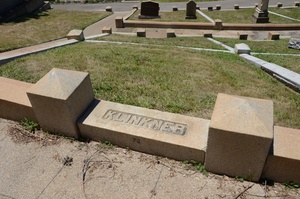 CC SA-BY Our Oakland
Klinkner died young at age 40, and is buried in Mountain View Cemetery in Plot 27. There is no grave marker, but the lot is marked with the Klinkner name.