Claude Benton Barton (November 28, 1884 – September 6, 1948) was an architect who designed the beautiful brick RPM-Merit Transmission Parts Building on 24th Street. During WWII he worked for the city of Oakland's Housing Authority at 1006 Cypress Court. He and his half brother F. Eugene Barton designed the remodel of the Sequoyah Country Club in 1928. 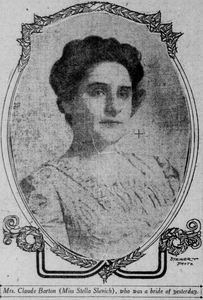 Claude was born November 24, 1884 in Utah to Louise ("Lulu") Stenhouse Horrocks Barton (1865 – 1940) and John William Horrocks (1858 – 1889). Horrocks died in 1889 and Louise married Fred Birchell Barton. After Louise divorced Fred in 1901 on grounds of desertion, Louise and Claude's half-siblings, F. Eugene Barton and Dorothy Barton (Bekins) moved to Oakland. Claude's half brother Frederick Eugene Barton (1889 – 1944) was also an architect, and served as a lieutenant in the transportation corps during WWI.

Stella was the sister of city council member and later mayor John F. Slavich. Claude and Stella had a daughter, Marjean Barton (Mills) (October 30, 1919 – December 24, 1986). (NB: Marjean's name is listed as Marjory in some records.)

Claude apprenticed with architect F. S. Van Trees in San Francisco, then opened a practice in Oakland 2. In 1910 he was the senior partner of Barton and Davis.

Claude Barton died in 1948 in Napa, and is buried in the Slavich family lot in Holy Sepulchre Cemetery in Hayward. Stella lived until 1970 and is also buried in Hayward.