The mission of the Clausen House is "to create opportunities for adults with developmental disabilities to gain competency, develop relationships and join the community with increasing command over their own lives." 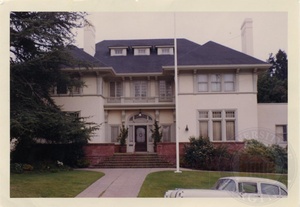 Currently, Clausen House occupies the former home of Chief Justice Earl Warren, who lived in the house from 1934 until he moved to Sacramento and the Governor's Mansion in 1943. 3

Clausen House was founded in 1967.

The Clausen House was founded in 1967 and started out as a single group home. 2 The Clausen house now includes "three residential homes, an Independent Living apartment complex, a community center, adult education, supported employment, and social recreation." According to the Clausen House website:

"The organization began as a residence for women with mental retardation, housed in the former home of industrialist Henry J. Kaiser at 664 Haddon Road in Oakland. The residence was named after an Oakland physician, Dr. Edwin Clausen, whose daughter was one of the first participants in the program. At the time, the concept was innovative, because the residence was in the community and the women who lived there learned skills to help them participate more fully in mainstream society. In those days the only alternatives to living at home with one's family were the state hospital system (now called Developmental Centers) or a board-and-care situation, typically with a poor family trying to supplement its income by taking in persons with disabilities. In either case, it was purely custodial care."

"The Clausen House model was different. By 1975 several residences were established and an array of skills classes were developed in partnership with the Oakland Unified School District Adult Education program. In 1976 Clausen House purchased the Lenox apartment building and initiated what is now its Independent Living Services program (ILS), the first of its kind in Northern California. Five years later, Clausen House had established a performing arts troupe, a catering company, and what is now the Supported Employment program."