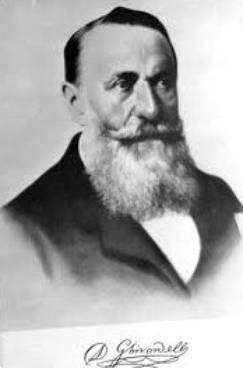 Domenico “Domingo” Ghirardelli (February 21, 1817–January 17, 1894) was the highly successful founder and patriarch of the Ghirardelli chocolate empire, and a long-time Oakland resident.

Born in Rapallo, Italy to parents Madelena and Giuseppe Ghirardelli (a food merchant), he was an apprentice with Romanengoʼs, a local chocolate maker.

Ghirardelli was politically aligned with Giuseppe Garibaldi, the father of the Italian unification movement. When Garibaldi fled a death sentence in Italy and went into exile in South America, Ghirardelli and his young wife Bettina followed, moving to Montevideo, Uruguay, where Domenico worked at a coffee and chocolate establishment.

Fearing instability due to Uruguayan border disputes and seeking better opportunities, in 1838 the couple relocated to Lima, Peru, where Ghirardelli opened a confection shop next door to American expat James Lick, who was a cabinet and piano maker. While in Peru, Ghirardelli learned to speak Spanish, and began to refer to himself as Domingo (the Spanish version of Domenico).

The California Gold Rush led Lick to emigrate to San Francisco in January 1848, taking with him, among other valuables, 600 pounds of Ghirardelli chocolates. So popular were the chocolates that Lick wrote to Ghirardelli, persuading his good friend (and his family) to join him in San Francisco … and to bring more chocolates!

Upon Ghirardelliʼs arrival in 1849 he tried his hand as a gold prospector in mines near Jamestown and Sonora. When that proved unsuccessful, he opened a general store in San Francisco, which catered to needs of miners. In 1852 Ghirardelli turned to what he know best, opening a chocolate shop.

A recession swept the nation in 1870, then the Panic of 1873 triggered the Long Depression (1873–79). This financial instability led to Domingo Ghirardelli and business partner/son-in-law Angelo Mangini being forced to declare bankruptcy in 1870 [or 1871 … searching for court records]. Mangini disappeared, leaving Ghirardelli to deal with the financial difficulties, dramatically scale back and rebuild the company.

In addition to the Ghirardelli Chocolate Company in San Francisco, Ghirardelli owned several other businesses/stores, as well as extensive real-estate holdings in Oakland and neighboring communities. In 1872, the first enterprise he sold was his general merchandise store located in Hornitos, operated by his step-daughter Dominga and her husband Frank Barbagelata.

By 1874 everything else Ghirardelli owned was auctioned off, including the beautiful Ghirardelli House, its contents and all his other properties and stores, with the exception of the Ghirardelli Chocolate factory in San Francisco. Proceeds from the auctions netted only $111,450.

Carmen and Domingo Ghirardelli raised eight children of their own, plus Carmenʼs daughter from a previous marriage, Dominga Martin Barbagelata (1846–?)

In 1862, when oldest daughter Virginia was 15, Ghirardelli let her marry Angelo Mangini, who worked at the time as the company bookkeeper. The Ghirardelliʼs first grandchild, Aurelia, was born on July 18, 1863. Angelo Mangini, the son-in-law, became a full business partner in 1868. Unfortunately, Virginia died young at the age of 20. It appears that Aurelia was being raised by her grandparents after Virginiaʼs death, and certainly was with Domingo and Carmen three years later when Angelo—described as “fidgety”—vanished in 1870. Mangini, accused by a business associate of embezzling over $10,000, “fled to parts unknown.”

Ghirardelli sent the three oldest of his five sons to boarding school in Genoa, Italy. Domingo, Jr. and Joseph, each gone for approximately seven years, returned to attend the Jesuit Santa Clara College before beginning their business careers with Ghirardelli & Sons. Third son Caesar died at the age of 10 while away at boarding school, which may be why the two youngest sons seem to have not been sent abroad for their education.

As an art student at the California School of Design, taking classes from acclaimed landscape artist Christian Jorgensen, daughter Angela, described as “a wealthy young society girl” captured Jorgensenʼs heart and the two married in 1880. From all accounts theirs was a happy and comfortable marriage. The Ghirardelli family fortune meant that Christian could focus on his painting, while they traveled throughout Europe, wintered in Carmel, and lived in Yosemite Valley from 1899 to 1918. Various celebrities, including President Roosevelt in 1903, visited the Jorgensens in their Yosemite home. The couple, who had two children, lived out their last years in a Piedmont home, with Christian Jorgensen passing away on June 24, 1935, and Angela dying just 6 months later. Angela, Christian and daughter Aimee are all buried in the Ghirardelli family mausoleum in Mountain View Cemetery.

Youngest son Eugene did not seem to fare as well as his other more successful siblings. He did not work for Ghirardelli & Sons as did his older brothers, but tried to run his own venture, E. Ghirardelli Mercantile Company, which failed, leaving him to be sued in Superior Court. Eugene married Rosie (or Rosa) Capelli, with whom he had two children, but in 1909 he “ran out on his wife and disappeared” and was declared legally dead by his wife in 1921.

The Pardee Home Museum Newsletter of November 1999 states that the Ghirardelli family lived in at least eleven homes in Oakland, starting with the Ghirardelli House on 3rd and Jefferson Streets, which was auctioned off due to the bankruptcy. Further, the Newsletter writes of “Ghirardelliʼs widow died at 1227 Chestnut” but as Carmen died in 1889, and Domingo died five years after her in 1894, the reference was clearly a typo as “widow” should have been ‘wife.’

Other Oakland addresses credited to the Ghirardelli family was a son living “at Market and 19th,” another son who lived at 1147 Poplar Street, and one of the daughters who lived at Union Street and 14th Street.

In 1878 Ghirardelliʼs granddaughter Aurelia Mangini became extremely ill and when it became apparent that death was imminent, the family sent for the Catholic priest to administer last rites. Several accounts of what followed have circulated over the years: the priest thought Domingo Ghirardelli had not donated enough to the church; there was a heavy rainstorm; the priest was drunk. Whatever the reason, the priest never came and young Aurelia died on January 3, 1878.

Carmen Ghirardelli, a devout Catholic, was devastated, and from that day on Ghirardelli forbade the entire family from ever entering a Catholic church.

Then one night sometime in 1890 [need to confirm exact date], Domingo and his sons took a horse-drawn wagon to St. Maryʼs Catholic Cemetery and moved the Ghirardellis buried there (including Aurelia) to Mountain View Cemetery next door. 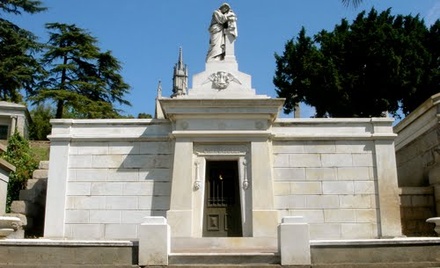 According to an article in the San Francisco Call, “Creditors Wait 40 Years for Money: Ghirardelli-Mangini Bankruptcy Proceedings Settled. After pending 40 years, the bankruptcy proceedings in the estate of Domingo Ghirardelli and Angelo Mangini, the original manufacturers of Ghirardelliʼs chocolates, were brought to a close yesterday in the United states district court when Judge George Donworth signed the petition confirming the sale of 223.39 acres of land in Richmond to W. H. Spaulding for $124,631. Many of the creditors, old and bent with age and limping on canes, were present. These creditors had been waiting all these years to realize 100 cents on the dollar. But even now their claims will not be satisfied in full. They will receive about 75 cents on the dollar.

On Sunday, September 18, 1887 Carmen Ghirardelli passed away at the age of 58 while at the home of her sister, who resided at 1227 Chestnut Street in Oakland. The funeral for Mrs. Ghirardelli, who had lived in Oakland for 30 years, was held at the Church of the Immaculate Conception on Tuesday, September 20, 1887.

While on an extended vacation to his hometown of Rapallo, Italy, Domingo Ghirardelli died of influenza on January 17, 1894. His body was returned to Oakland and buried in Mountain View Cemetery with the rest of his family, just as he had requested.

There are currently 23 Ghirardelli relatives buried in Mountain View Cemetery, along with Jorgensens, and assorted other spouses, grandchildren, etc.