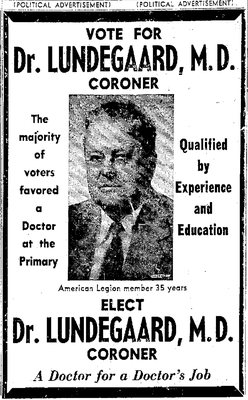 from 1954 campaignDr. Edward Manfort Lundegaard (January 10, 1889 – August 22, 1977) was a physician and the Alameda County coroner 1954 to 1958. Lundegaard's name was in newspapers nationwide in 1944 because he performed the autopsy after famous evangelist "Sister" Aimee Semple McPherson died in unusual circumstances in Oakland.

Lundegaard was born in Wisconsin in 1889 to Norwegian immigrant Rev. Ellert Johannas Enokssen Lundegaard and Eliza Morton (Lundegaard) (1896–1976). The family moved several times, including Wisconsin, Washington, and Montana, before coming to Oakland sometime before 1910. Lundegaard married Johanna Stein (Lundegaard) on June 14, 1917 in Oakland and they had two daughters, Eleanore Lundegaard (Nissen) and Laura Lundegaard (Anderson). Lundegaard was the great-grandson of Teis Lundegaard, a signatory of the Norwegian constitution and a parliamentarian.

Lundegaard studied medicine at the Oakland College of Medicine and Surgery, and served in the Navy Medical Corps in WWI.

At the time of his marriage to Johanna in 1917, Lundegaard's office was in the Dalziel Building.

He served as a surgeon in the coroner's office from 1946 to 1954. Lundegaard was a quiet person, so it's somewhat remarkable that he ran for election as the County Coroner against the Knowland-backed candidate in 1954 and won.

In 1956 the a citizen's commission recommended the position of county coroner become an appointed position "to improve efficiency and eliminate politics." 1 Some people were unhappy because Lundegaard had appointed private undertakers as deputy coroners, and several of them had contributed to his election campaign. They also felt that undertakers would have a conflict of interest and unfair advantage over competitors. Lundegaard withdrew the appointments.

There was a ballot measure in 1956, and the position was changed to a hired position. After Lundegaard's term was up in 1959, the county hired a coroner. (In 1989, the County Coroner's Bureau came under the authority of the County Sheriff's Office.)

Lundegaard died in 1977. His remains are interred at Mountain View Cemetery, along with those of Johanna, Laura, and Laura's husband Jim. 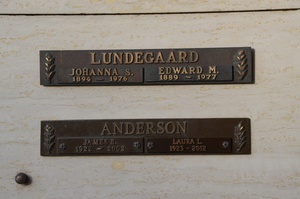