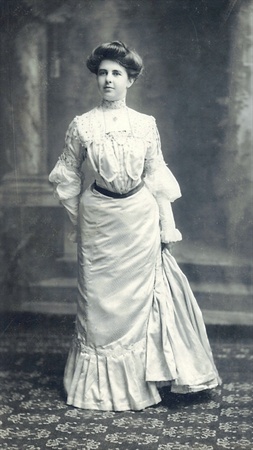 Evelyn Ellis SmithEvelyn Kate Ellis Smith (December 11, 1877–June 8, 1957) was a remarkable young woman connected with Frank "Borax" and Mary Smith. She was governess to various wards of the Smiths. Later, she served as Mary's financial officer and as her personal secretary. After Mary died, Evelyn married Frank and became the second Mrs. Smith.

Evelyn (sometimes written Eveline) was born in England in 1877. Her parents, Kate Grainger Ellis and Felix Ellis moved the family to Oakland in 1884, and she met Mary Smith while working as a teacher. By 1905, Mary had arranged for Evelyn's parents to live in the "old red house". Mary died in December of 1905, and had said to her friend Mae Miller almost a year before she died, "If anything happens to me, Frank is certain to marry again, and I hope it is Evelyn Ellis." 1 Her hopes were realized, and in January 1907, a little more than a year after Mary's death, Frank and Evelyn married.

They took a train trip through the Southwest to Miami aboard Frank's private railcar Hauoli, then visited Cuba and Jamaica on Smith's steam-powered yacht (also called Hauoli). Evelyn took over the running of Arbor Villa, a home she knew well. Frank had wanted children, and between 1907 and 1913 they had four: Evelyn, Dorothy, Mildred and Frank, Jr.

Frank had a series of disabling strokes in 1928. He retired and Evelyn took over the running of his businesses.

Evelyn died in 1957 and her ashes are in the Smith mausoleum at Mountain View Cemetery.