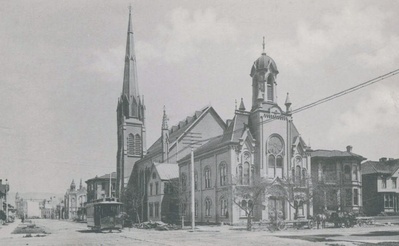 The congregation met in a building on 9th Street between Washington and Clay Streets. In 1887, they purchased land at the northeast corner of 13th Street and Clay Street to build a church. The first President of the congregation was Herman Meese, who was also one of the original organizers of the church. Meese was the father of Edwin Meese. 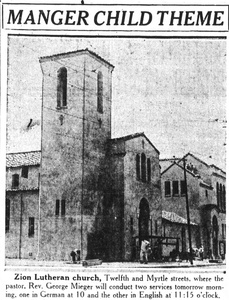 The church sold the property at 13th and Clay in 1892, and held their final service on Easter Sunday, April 17, 1892. 9 They then moved to the southwest corner of 12th Street and Myrtle Street, including the building. 10

In the process of moving the building, Bayles, the house mover, cut down 3 trees on Oakland High School property. He said it was with the understanding of pastor Theiss and Director Smith (?). This caused a minor uproar, with Public Works holding back Bayles' $20 deposit, and threatening to arrest him and fine him $100 if he didn't replace the trees. 11 The move also required "the cutting of 100 single telephone wires on Clay Street, and the dropping of two telephone tables, each containing about 125 wires." The Piedmont Cable Car Company complained about the move interfering with business "throughout the greater part of the day" and planned to sue for $50 per hour. As soon as the church was moved off its old spot, the home of L. H. Briggs (who had purchased the property from the church) was moved to the lot where the church had been. 12

The old building on 12th St. is now home to Bethlehem Lutheran Church.

Question: What year was the current 12th and Myrtle building constructed? 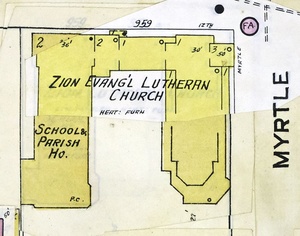 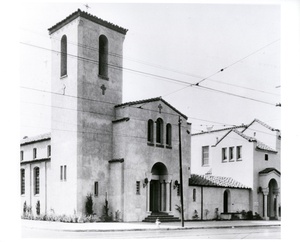