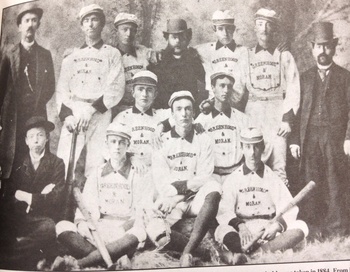 While in the California League, the G&Ms were very popular. Oakland fans often travelled with the team to Sacramento.

In 1887 the G&Ms finished in last place, although they had a lot of talent. Part of this was due to the loss of George Van Haltren to professional baseball and part of it was due to insubordination: the team just wasn't very good at cooperating. Pitcher George Borchers, 19, was great on the mound when he felt like it. One day he pitched a no-hitter; one day he didn't even show up. 1

George Van Haltren was a future major leaguer: a left-handed pitcher who could also hit. He played in the Major Leagues for 17 years and put together a sterling career as both a pitcher and a hitter. Later he came back to Oakland and served as a manager-player for 5 years, starting in 1905 at age 39. 2 After that, he was a manager and umpire for the Pacific Coast League. It is possible that he was tricked into signing his first pro contract: at 20 years old W.A. Nimick of the Detroit team may have liquored him up before getting him to sign for the Pittsburgh minor league team. After Van Haltren thought about it, he decided to stay in Oakland with the G&Ms, then went pro. 1

Danny Long, a teammate of Van Haltren, later managed the San Francisco Seals and scout for the Chicago White Sox.

Willard Brown (actually Fred W Lange) caught for the G&Ms in 1886 then caught for the New York Giants for 7 years. He is the author of History of Baseball in California and the Pacific Coast Leagues, 1847-1938. 2 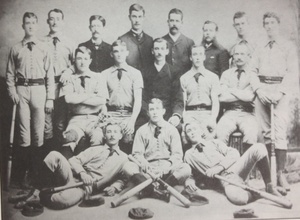 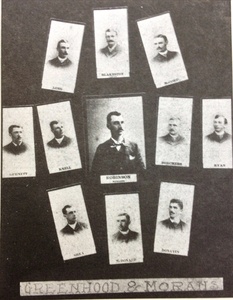