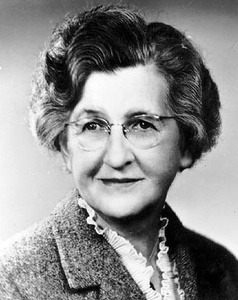 Ms. MacGregor attended Washington School, and graduated from Oakland High School (which at that time was located at 12th Street and Jefferson). She then went on to attend the University of California, Berkeley for six years, graduating with her bachelors degree in 1920, and her Juris Doctor degree in 1922.

Following law school she went job hunting in both Oakland and San Francisco, and finally obtained her first job in March of 1923 as deputy clerk in the court of Justice of the Peace Harry W. Pulcifer 3, at 512 Broadway (the address no longer exists, and currently, the freeway is there). She went on to become the chief clerk and worked for Judge Pulcifer for eight years.

Beginning on April 1, 1935, Ms. MacGregor served as administrative secretary to Earl Warren when he was the Alameda County District Attorney, the Attorney General and for almost eleven years when Warren was Governor of the State of California. When she first started working for Earl Warren he made her a deputy district attorney as well as his executive secretary, because she was a lawyer.

The California State Youth Authority was Ms. MacGregor's idea, one that she suggested to Earl Warren. Not only did Warren make her his liaison with the Youth Authority, he also appointed her to its policy board in 1953. She was subsequently appointed by Governor Brown to the Advisory Committee on Children and Youth. In 1969 Ms. MacGregor was serving on a similar Alameda Clounty committee. 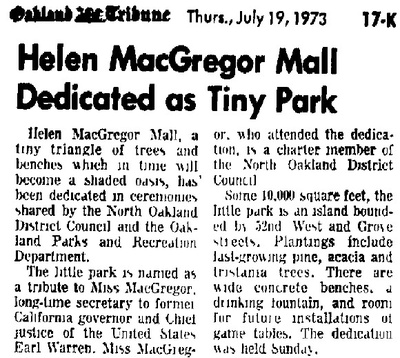 Ms. MacGregor, who was a charter member of the North Oakland District Council, attended the dedication of the Helen MacGregor Mall, which took place on Sunday, July 15, 1973.

She was enthusiastic about the governor's health insurance program because she had seen families ruined by hospital bills and by doctor's bills which were completely out of line with the ability of the people to pay. [What year(s) was this??]

At her retirement from the California State Youth Authority in 1957, Earl Warren said:

"I can never repay Helen for the service she rendered to the state during her many years with the various offices in which she worked nor her helpfulness to me and my family. No hours were too long for her. No work was too exacting. And nothing disturbed her gentle disposition.

It was my great pleasure to appoint Miss MacGregor to the Youth Authority, I knew she was serve there as she did in her other capacities. She was always interested in the welfare of youth, and in spite of her other arduous duties, always inspired others likewise to become interested," 2