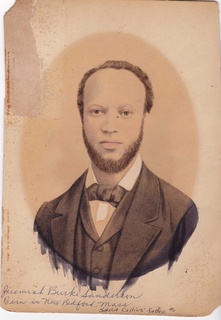 Jeremiah Burke (“J.B.”) Sanderson (August 10, 1821 – August 19, 1875) was an early activist for civil rights and equal education, and was the first appointed minister of the First African Methodist Episcopal Church.

Sanderson was born August 10, 1821, in New Bedford, Massachusetts, to Sarah and Daniel Sanderson. "His father, Daniel, may have been partly or entirely Scottish; his mother, Sarah, was either entirely or partly native Wampanoag Indian." 1

Even as a young man, Sanderson became involved in the abolitionist movement, sometimes speaking at the same events as Frederick Douglass. He lived with the Douglass family for a time. 1 He also corresponded with William Cooper Nell over the years, and named his son after him. His son Thomas was probably named for English abolitionist Thomas Clarkson.

"...in 1871 [ Sanderson ] was appointed vice president of a convention held [ in Stockton ] on the education of children of color in the state. He remained active in equal rights, having helped found the state’s Franchise League in 1862 and having signed a call in 1873 for a state convention of blacks to assure equal rights under the Fifteenth Amendment." 1

"During this time he also helped organized the California Conference of the Union Bethel African Methodist Episcopal Church, served as a local preacher, and was ordained an elder in the church by T. M. D. Ward, who had also lived for a time in New Bedford, in Stockton in 1871." 1

In 1874, Sanderson became the first appointed minister of the First African Methodist Episcopal Church (then Shiloh Church) in Oakland.

Sadly, while walking home from a prayer meeting in August 1875, Sanderson was struck and killed by a Southern Pacific train. Two funerals were held, one at Shiloh, and another at Bethel Church in San Francisco. 4