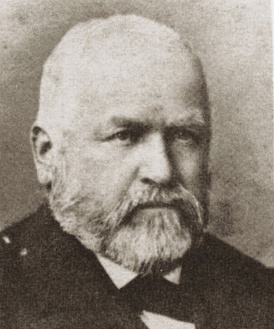 Born in Switzerland, Kellersberger learned civil engineering and the military sciences at a military academy in Austria. He traveled to New York in 1847, worked as a surveyor in Central Park and around New York City, then moved to Texas where he married Caroline Bauch (Kellersberger), daughter of a Lutheran pastor.

After news of the gold rush reached Texas, the Kellersbergers embarked on a six-month voyage to San Francisco around Cape Horn. 1

While in San Francisco, Kellersberger in 1851 and 1856 was a member of the Committee of Safety of the San Francisco Vigilantes, a group which hanged three murderers and forced a hundred other outlaws to leave town on penalty of death.

Julius Kellersberger was hired in 1851/1852 by Oakland founders Edson Adams, Andrew Moon, and Horace Carpentier to survey Oakland’s original townsite. In 1852 Kellersberger laid out Oakland’s street pattern in the area at the mouth of the San Antonio Creek and Contra Costa Bayou. 2 Kellersberger's “”Complete Map of Oakland” continues to serve as the basis of the legal descriptions for many parcels within Oakland’s original boundaries. He named Caroline Square after his wife. 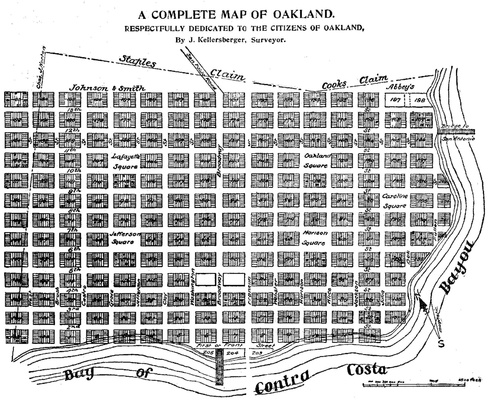 ”Kellersberger selected a rise of the land for the center of the new town. Standing on this hill only 40 feet above sea level, the site must have evoked the feeling of an island surrounded by water and tidal marshes. An existing road, now San Pablo Avenue, reached this hill from the north across a narrow land bridge between two low-lying wetlands. The old road continued across the mouth of the tidal estuary, now Lake Merritt, towards the San Jose Mission. Across from the mount and the estuary the hills rose steeply. The site was well chosen for a new town, for it had everything one could wish for: trees as building material growing between the hills in the valleys, fresh water, plenty of fish in the bayou and grazing land on the hills. The estuary provided a natural harbor directly opposite of San Francisco; Aesthetically, the place must have been of exceptional beauty and comfort. There are very few cities in this world, especially at sea level, with as temperate a climate as Oakland.” 2

”Right there, at the center point of that rise, Kellerberger laid out a street 100 feet wide at an angle of 20 degrees east of north, and ran it down the slope towards the bayou to a landing place. The street became Broadway and to both sides Kellersberger staked out 8 parallel streets and gave them names like Webster, Castro, Clay and Harrison. Starting at the water’s edge, he ran 14 numbered streets perpendicular to these streets, creating a grid of 224 city blocks measuring 300 by 200 feet each. He designated seven as public open spaces and arranged them symmetrically across the grid. Two of them together, centered on Broadway between 4th and 5th Streets, were intended to become the town center. Four were evenly distributed to serve each of the four city quadrants as neighborhood squares. The seventh he named for his wife, Caroline, and placed it by itself near the eastern edge of town.” 2

”Each block was divided into 28 lots, 4 on the narrow sides of each block and 12 lots on each long side. The buildable land totaled 325.5 acres, and if one family had settled every single one of the 3,275 lots, the density of the city would have been approximately 10 units per acre. The blocks were settled from the waterfront upwards; most blocks along the estuary required extensive pilings to lift structures above the high tide or flood level.” 2

”Kellersberger was soon appointed City Engineer, and in 1854 was officially elected to that position. In 1857, just before he left the Bay Area to return east, he revised his Oakland design and introduced a new diagonal street, Market Street. It connected the Embarcadero at Brush Street directly to the San Pablo Highway. Such a new street and the erasure of one whole row of city blocks were only possible because apparently the western flank of the city had not been settled. Market Street became necessary as a route for freight traffic that could now avoid the climb up the hill to 14th Street, but still reach the highway directly from the Wharf and on level ground. Market Street defined Oakland’s westerly expansion centered on 7th and 8th Streets. For Kellerberger, the western expansion of Oakland apparently held greater promise than the northern expansion. In his mind, Market Street, like its counterpart in San Francisco, would become the city’s main divider, and people of Oakland would refer to the city’s two parts as “West of Market” and “East of Market.” The revised map also introduced Telegraph Avenue as a continuation of Broadway. Near the foot of Telegraph and 14th Street, Kellersberger combined four of the regular blocks and designated them for the use of California College. That institution would move up Telegraph to Berkeley, as the University of California in the late 1860s. Across the narrow mouth of the Estuary another extension to Oakland appeared on Kellersberger’s revised map, called Brooklyn. The two settlements were linked by a bridge at 12th Street.” 2

In September, 1855, he was appointed by President Franklin Pierce as Deputy Surveyor-General of California under Colonel Jack Hays, charged with completing such important surveys as the “Humboldt Meridian … north to the state line … and to extend the second standard line … west to the Pacific Ocean … ” He also completed the survey of the “Mount Diablo Meridian … west to the Pacific Ocean.”

President James Buchanan in 1857 removed Hays and Kellersberger from office in furtherance of his “Spoils System” policy. Having already been offered a railroad construction assignment in Mexico, Kellersberger decided to leave California permanently, and he sent his wife and children back to Galveston to live. 1

Julius G. Kellersberger died in his home country of Switzerland in 1900, after living in the United States for 49 years. 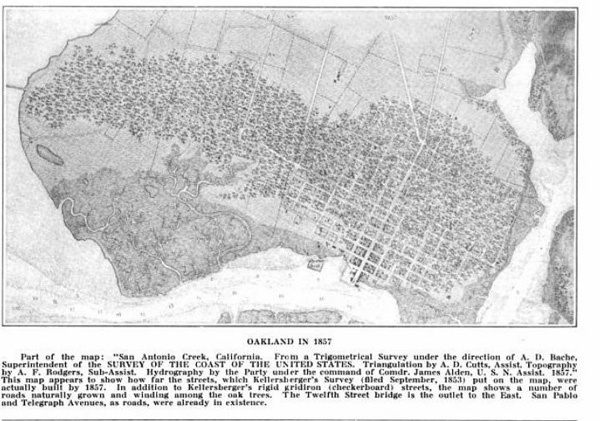 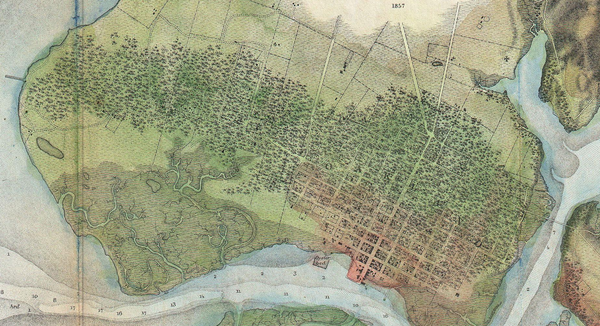