By June 1947, the Board of Nurse Examiners approved the Permanente Foundation Hospital in Oakland for the establishment of a School of Nursing with the express purpose of:

"Preparing young women in the art and science of nursing with special emphasis to be placed on the teachings of methods of protecting community health and on the skills and techniques of bedside nursing." 1

One of the first black women to graduate from the school was Jessie Cunningham, who went on to become the first black nursing supervisor at the Kaiser Oakland Medical Center.

From 1947 through 1976, the school was in the former Hotel Piedmont, near where the present day Kaiser Permanente Hospital stands. The school is remembered with a statue near the emergency entrance to the hospital.

Kaiser Foundation School of Nursing in an old hotel building on Piedmont Avenue near the Oakland hospital, 1948 to 1976 3 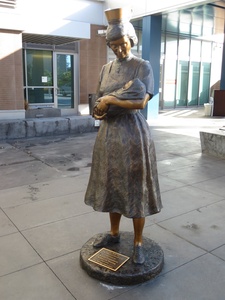 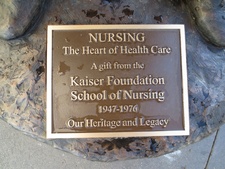