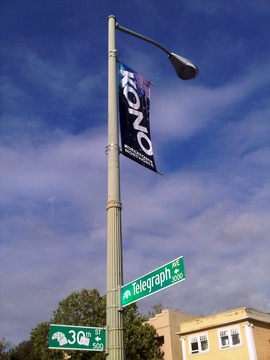 KONO Banner Telegraph Av at 30th St
photo by HiMYSYeDKoreatown/Northgate, or KONO, is a controversial name given to what was formerly officially known as simply "Northgate".

The name was imposed by landlords, many of whom are of Korean descent. However, most of these businessmen do not live in the neighborhood. Many do not even live in Oakland. The neighborhood's residents are only about 7% Korean-American. As a result, many neighborhood residents resent the name. The true demographics of the area are very diverse.

According to the official website, Koreatown Northgate "is a lively and diverse business district on Telegraph Avenue between 20th and 35th streets in Oakland, California."

"The Koreatown Northgate district is situated in-between Oakland's growing Uptown Arts and Entertainment District and the thriving Temescal-Telegraph business district. It also sits adjacent to the Broadway Auto Row district and the MacArthur BART station, two areas that are planning for major new residential and mixed use projects." 1 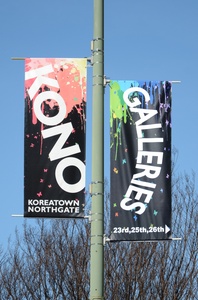