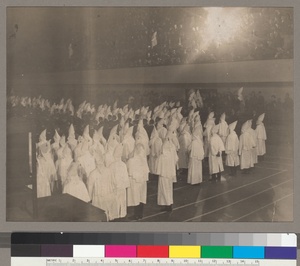 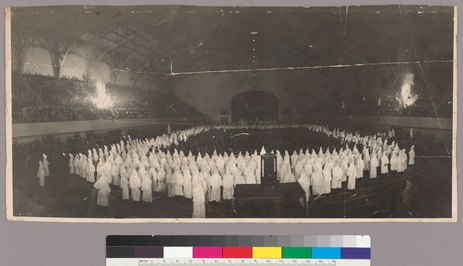 Oakland Auditorium circa 1925, are courtesy of the UC Bancroft Library. Please do not reproduce or share without the permission of the Library. One photograph bears photographer's stamp C.V. Estey, Commercial photographer, 462 20th St. Oakland
The Ku Klux Klan was active in Oakland beginning in the 1920s. Organizers W. G. McRae and R. M. Carruthers of the Knights of the Ku Klux Klan, Inc. opened an office in Downtown Oakland in August of 1921.

But this version of the KKK's only resemblance to the Reconstruction Era KKK v1 or the 1960s to current day KKK v3 was it's anti-black racism/protection of white racial purity, scattered (?) lynchings of blacks, and a strong dose of sexual fear of black men. The old KKK was extinct by the time the new one was created. The 1920s KKK was several orders of magnitude larger, geographically distributed nationally, and and better organized than the KKK of the 1860s. At its peak it had hundreds of thousands of dues paying members, many in Midwestern, Northwestern, and Western big cities. And it had tens and maybe hundreds of thousands of women members in a largely independent parallel organization. Those white robes and hoods were the entreprenurial founder of the 1920s KKK copycatting D.W. Griffith's Birth of a Nation. The original Southern post Civil War KKK didn't wear white robes and hoods. But the 1920s founder made robe and hood sales a major revenue source (think Boy Scouts uniforms) for the national KKK organization officers.

The 1920s KKK was as much anti-immigrant, anti-Catholic, anti-Semitic, anti-Bolshevik as it was anti-Black. Most confusing to current day people is KKK v2 strong support of the women's rights movement and even good government proposals. One prominent national speaker who supported the WKKK was evangelist Bishop Alma White, a strong supporter of the ERA. (note 2)

In 1923 the secretary of Klan No. 9, Ed L. Arnest, and President Leon C. Francis ran for city commissioner and school board member, respectively. Arnest won 9% of the vote and Francis 18% in the primaries. But they had significant swing vote power at the polls. KKK supported is credited by Rhomberg with the election in 1926 of an Alameda County Sheriff and a city commissioner (precursor to councilmember) in 1927. In 1922, a Berkeley resident, Friend Richardson, became Governor of California with the ardent support of the state and local KKK. At a rally in the Oakland Auditorium (aka Kaiser Convention Center) Rhomberg quotes a KKK speaker declaring "The election of Richardson is imperative if we are to remove the Jews, Catholics, and Negros from public life in California."

The following summer Klan organizers planned a statewide Ku Klux Klan convention in Oakland and secured a 4th of July parade permit. Commissioner Frank Colbourn later revoked the permit and stood firm against the Klan, even when hundreds of Klan members protested at a City Council meeting. Subsequently the convention and parade were held in Richmond, where 3,000 Klan members were in attendance for the 4th of July parade, followed by an initiation ceremony in the El Cerrito hills.

The Oakland Klan continued to grow into October 1924, with group initiations of 50 recruits or more at a time. According to Rhomberg (see 1) By 1924 there were at least 2,000 Oakland members. Not only was that a significant 1% of the population but many of them were middle class and upper middle "prominent and active" citizens. (See Rhomberg and Blee) including policemen and firefighters, and Protestant churchmen. However, the Atlanta-based national organization tried to impose greater control over the Oakland-based group, which led to tensions between the two factions.

The majority of the publicly known members (58%) lived in East O. West O was not just older area but more diverse than East O.

But despite the chaos and power struggles at the national level largely caused by defalcations, boozing and dalliances, and greed, in August 1924 the other Oakland Klans, 1 and 3, led an initiation ceremony of 500 new members at the Oakland Auditorium attended by 8,500 Klanswomen, Klansmen, their supporters, and a marching band.

On November 28, 1924 approximately 500 members of Oakland Klan No. 9 passed a resolution refusing to recognize the authority of Imperial representative G. W. Price and voted for his removal. Price, acting for Imperial Wizard Hiram Evans, suspended the Oakland chapter. Klan No. 9 remained active until April 1925, when its property was seized due to the lengthy litigation between the local chapter and national organization who had sued to recover assets and the rights to the Ku Klux Klan name.

In time, Oakland Klan No. 9 won all the legal lawsuits, but by then had no more funds to continue.

Rhomberg explains the demise of the Oakland KKK as a result of the disillusionment of local members with the corrupt behaviour of their leaders who did achieve political power in Oakland and Alameda County, not a disavowal of the rascist, nativist tenets of the KKK ver2 and not because of the legal attacks by the Oakland city commissioners starting in 1922 when the city commissioners unanimously passed 9.08.070 - Masks and disguises. "It is unlawful for any person in the city to appear in public in any mask, cap, cowl, hood. They also cancelled a KKK parade permit. That city ordinance is still in our city code.

Given the narrow mindedness, outright bigotry and xenophobia that by many accounts appears to have been widespread here a century ago, Oakland was already oppressive, with or without the Klan. Take this snippet from a 1917 Lakeshore Homes Association ownership-restriction clause: