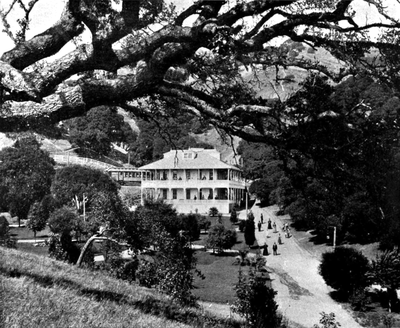 Laundry Farm Hotel, 1898. 3 Note the streetcar behind it.

According to A.E. Norman, "this hotel was first built in 1892 ... it was called Laundry Farm. The name was changed to Leona Heights in 1894. Many Sunday School picnics centered at this memorable inn with its park-like setting." 1

Steven Mix prepared a map in 1999, updated by Lee Donehower in 2002, showing the location of numerous landmarks in and around Leona Heights, including the Laundry Farm Hotel --> LaundryFarm.pdf

In 1887, the Tomkins heirs sold over 650 acres of the Laundry Farm to one H.T. Smith for $70,000. Smith bonded the option to J. H. Woodward. At the time, the San Francisco Chronicle reported that the area was being rumored to be part of a "summer resort and water right scheme." The property "has been for many years a popular picnic resort. It has a nice stream of water, fine view and some other natural attractions in the way of scenery. It could be easily made accessible by a short branch railroad tapping the Southern Pacific Seminary Park station, just beyond Melrose, and it is also said that the property bonded commands a fine water-right, where enough water could be stored behind a series of dams to successfuly supply the city of Alameda at least." 2 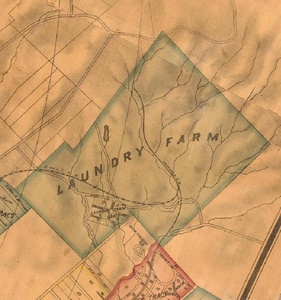