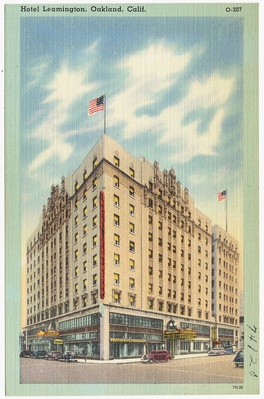 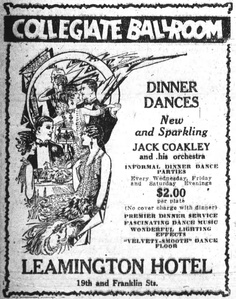 The Leamington Hotel (or Hotel Leamington) was considered an architectural masterpiece when it opened its doors to traveling business executives in 1926. Located downtown at 1814 Franklin Street, the luxurious Spanish style hotel was designed by architect W. H. Weeks. With a budget of over $2 million, Weeks included “every modern idea in the hotel construction,” which included a fully staffed children’s playroom, an information bureau for guests and a $30,000 pipe organ. Opulent social gatherings for wealthy Oakland residents were among the frequent events conducted at the Leamington. 1

But just four years after the hotel was built, owner J. K. Leaming sold the Leamington, and it was known as the Ambassador Hotel but it reverted to the Leamington name by 1933. In 1945 a major refurbishment brought new life to the hotel.

Amelia Earhart kept an office in the Leamington while planning her fateful final journey.

Evangelist Aimee Semple McPherson was in Oakland for a series of revival meetings, and was staying at the Leamington when she accidentally overdosed on sleeping pills.

Over the years, the once-elegant hotel fell into disrepair. During the 1960s, ‘Hotel Leamington’ as it was being called, hosted Boss A-Go-Go, Oakland’s ‘Only Teenage Night Club’ which had its Grand Opening on October 1, 1965. The hotel also served as a venue for rock bands, with a well publicized psychedelic rock show on February 10, 1967 which featured “The Sparrow, The Wild Flower, The Living Children and The Immediate Family” in the Leamington’s Regency Ballroom. On a side note, The Sparrow (also known as The Sparrows) later became legendary rock band Steppenwolf. 2 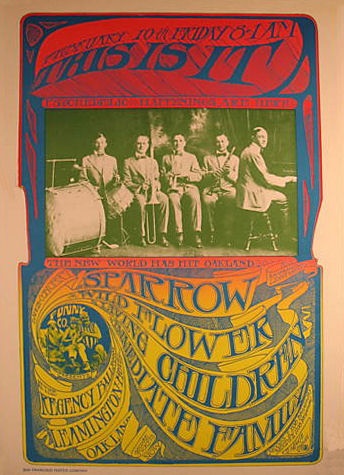 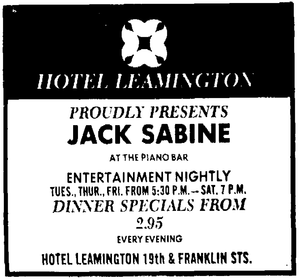 Bankruptcy caused the closure of the Leamington Hotel in 1981.

The City of Oakland teamed up with Portfolio Property Investors, an Oakland-based company, to convert the Leamington Hotel into office and retail spaces through a complete renovation which began in January, 1983. Retaining the original terra cotta exterior, the interior was redesigned to include an atrium and skylight, along with marble, brass and bronze details. 1

The common areas of the Leamington building were remodeled again in 2017, removing the finishes and surface treatments from the 1983 renovation. The original Spanish-style lobby was modernized during the 1940s; at present, no elements of the original 1926 interiors survive. The Benjamin Franklin Hotel in San Mateo - also designed by W. H. Weeks and opened in the same year - uses many of the same architectural elements.

Renamed The Leamington, the modernized offices offer a long list of amenities. 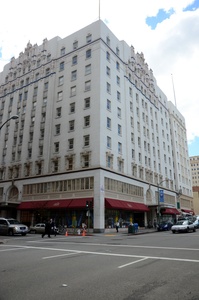 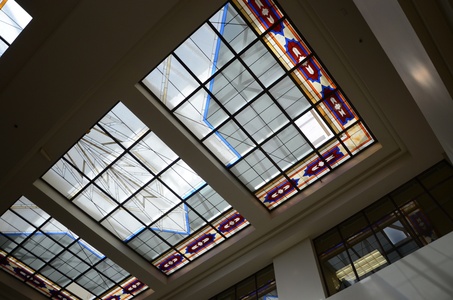 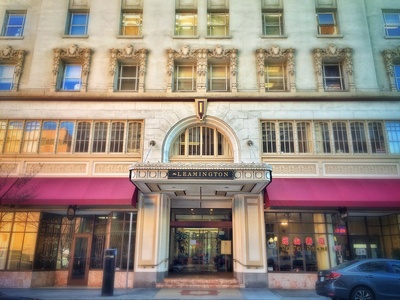